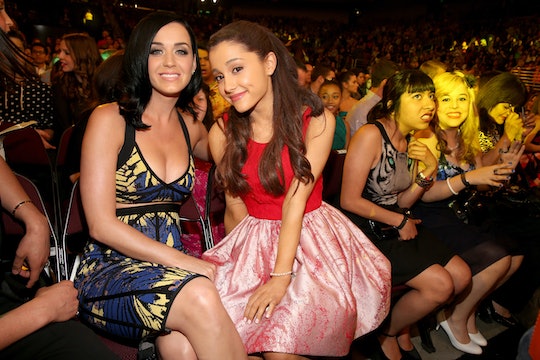 Daisy Dove is already a proud owner of some Givenchy winter gear.

Katy Perry’s newborn daughter may be a few months old, but thanks to Ariana Grande's baby gift, her little girl is already rocking designer clothes. Seasonal pieces at that!

Perry and fiancé Orlando Bloom welcomed their daughter, Daisy Dove Bloom, in late August, but the couple's celeb friends are still showering them with baby gifts. Over the weekend, the American Idol judge revealed on Instagram that Grande gifted her daughter a gorgeous puffy white snowsuit from Givenchy. "Katy and Orlando, Congrats & I adore you both!! Love, Ariana," Grande wrote in her note to the couple.

Now, if you want your little one to twin with Daisy, it will cost you a pretty penny. The same Givenchy snowsuit, which comes outfitted with a hood, along with detachable mittens and booties, and sold in sizes 6-18 months retails for $710.

This isn't the only gift that Daisy has received from her mom's famous friends in recent months. In September, Perry shared that Taylor Swift hand embroidered a silk blanket for Daisy and Beyoncé gifted her a massive bouquet in honor of her daughter's arrival.

Although the two singers have never collaborated on a song together, Grande and Perry are, indeed, friends. In 2019, Grande showed her generosity to Perry and Bloom when she paid for their meal when they were both dining at the same restaurant, separately, according to Good Morning America. "Orlando was like, 'Man, I have mad respect for her,'" Perry recalled during an interview on the Ellen K Morning Show in August 2019. "She was so kind — I love little things like that. Just grateful for this whole experience."

Givenchy snowsuits and nice dinners... how does one become friends with Ariana Grande?