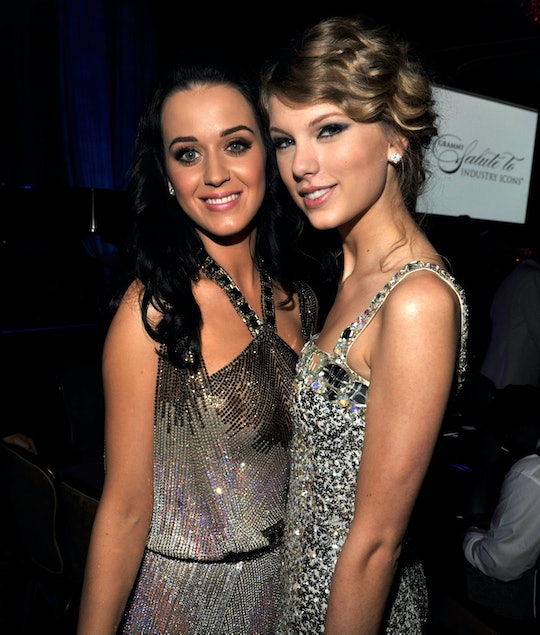 After years of rumored rifts, diss tracks, and countless articles written about them, a new era of empowered women who support each other has truly begun. Shortly after giving birth to her first child, Katy Perry revealed the sweet baby gift Taylor Swift sent her that seems to serve as a symbol of their renewed friendship.

The "California Girls" singer welcomed her first child, daughter Daisy Dove Bloom, on Aug. 27 with Orlando Bloom. "We are floating with love and wonder from the safe and healthy arrival of our daughter," the singer captioned a photo of her holding her newborn daughter's hand, while also sporting a manicure with a tiny daisy on her nail.

Since the birth of Daisy, who is also little sister to Bloom's 9-year-old son Flynn with ex-wife Miranda Kerr, Perry has shared a few of the adorable baby gifts she has received from celebrity friends. Like the gift she received from mom of three Beyoncé, who sent Perry a huge bouquet of white roses, dahlias, and other flowers with a handwritten card that read, "Congratulations on the new addition to your family — Beyoncé." The proud new mom shared a photo of her gift on her Instagram Story with the message "Ily @Beyoncé."

Then came another gift along with another handwritten note from Taylor Swift: a pink baby blanket hand embroidered with the words "Baby Bloom," a gift Perry said on Instagram that Daisy already "adores."

Perry shared a photo of the blanket and the card with the message, "Miss Daisy Dove adores her hand embroidered blankie from miss @taylorswift. Hope it's one she drags around for years till it becomes an unrecognizable shred that she keeps in her pocket as a teenager."

The card was addressed to "Katy and Orlando" and was dated in May, more than three months before Daisy's birth, which means the "Gorgeous" singer was really on top of things. Perhaps especially since she and Perry have made such an effort to clear the air after their well-publicized rift over the past few years. According to Billboard, Perry addressed their renewed friendship in an interview with Howard Stern earlier this year, explaining that she wanted to set a good example for young girls: "It's hard for young girls grown up, [with] cliques and high school and pettiness and all that stuff, so now we're super friendly and I've always wanted the best for her and we can talk about the best we want for each other."

There is at least one little girl who is benefiting from the end of Swift and Perry's rift. Little Daisy Dove Bloom, who has a soft new baby blanket with an extra special meaning.