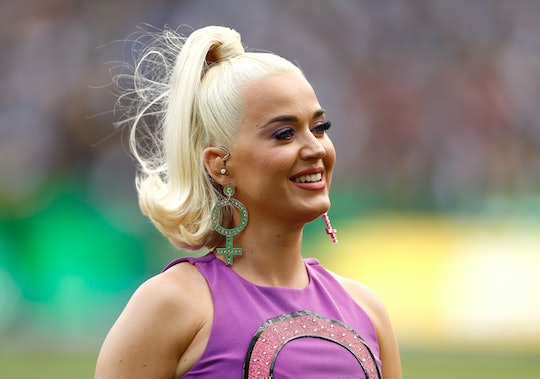 Who better to welcome you into the elite celeb mom club than Queen Bey herself, right? Not long after Katy Perry gave birth, Beyoncé celebrated her daughter Daisy's arrival with a perfectly gorgeous gift.

Perry and fiancé Orlando Bloom welcomed their daughter, Daisy Dove Bloom, into the world just days before the singer released her new album, Smile. While the new mom has been showered with well wishes and positive reviews after "giving birth to two babies," nothing can top Beyoncé's gift.

On Sept. 1, Perry shared on her Instagram story that Queen Bey — who is, of course, mom to daughter Blue Ivy and twins Sir and Rumi — sent over a stunning floral bouquet filled with white tulips, orchids, and roses, accompanied with a sweet note that read: "Congratulations on the new addition to your family! -Beyoncé." Perry responded to Beyoncé's gift on Instagram with a sweet note herself, writing on the photo, "Ily @beyonce."

Honestly, it's only fitting that Beyoncé would celebrate Perry's little Bloom with a massive bouquet.

Perry was probably pretty excited to get a such a gorgeous delivery from Beyoncé. In a 2016 interview with Women's Wear Daily, Perry said that she admires Beyoncé and Rihanna, especially when it comes to their social media presences. "With Beyoncé and Rihanna, it's very obvious they know what they are doing and you can see that they are micromanaging as well," she said. "They're multi-taskers."

Beyond caring for a newborn, Perry's first days of motherhood have been pretty busy, promoting her new album and everything. For instance, while Perry's musician friends were walking the red carpet at the MTV Video Music Awards in New York on Sunday, the singer sported a nursing bra and disposable underwear for her at-home VMAs look.

Now, whenever it's safe to socialize again, let's cross our fingers that maybe, if we're lucky, little Daisy will have a playdate with Bey's babes and their moms post all about it on their IG stories.