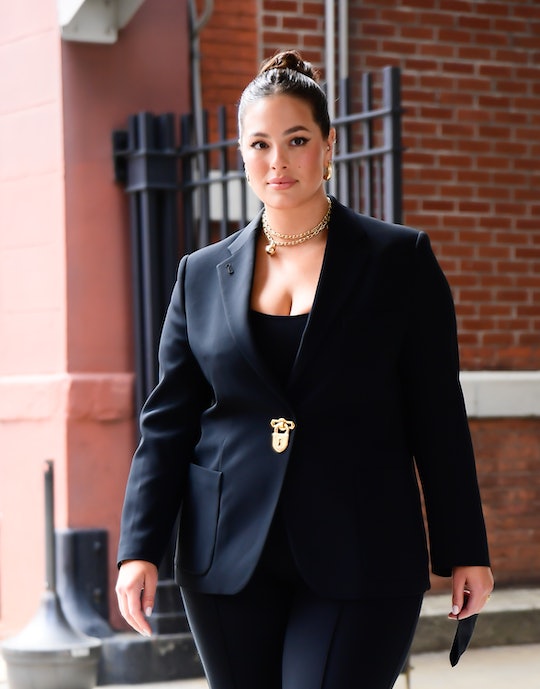 “All I can remember is feeling a light touch on my cheek, which I found out later was actually somebody smacking the crap out of my cheek.”

Supermodel and supermom Ashley Graham has long been an inspiration to women everywhere for breaking down barriers in fashion and demolishing limited perceptions of beauty. Graham has also become a fixture on social media as an inspirational mother, sharing incredibly vulnerable and candid experiences about parenting her three boys, Isaac, Malachi, and Roman. In a recent essay that she penned for Glamour, Graham pushed herself to be more honest and raw than ever before as she revealed the excruciating circumstances of her home birth and admitted to her ongoing postpartum confidence struggles.

Graham, who shares twin baby boys and a toddler with husband Justin Ervin, is known for opening up about even the most intimate details of motherhood, like tandem breastfeeding. And while the podcaster thrives on the organized chaos of motherhood, this is the first time she’s shared the scary details of her birth story in a very personal essay for Glamour. Not only did Graham experience serious hemorrhaging, she actually blacked out during her home birth.

“All I can remember is feeling a light touch on my cheek, which I found out later was actually somebody smacking the crap out of my cheek, someone holding my hand, my husband Justin in my ear, praying, and someone jabbing me with a needle in my arm. And I remember seeing darkness and what seemed like stars,” she wrote.

The situation was so precarious that those supporting Graham didn’t even want to tell her how bad things actually were at the time. “I’d lost liters of blood. They didn’t want to tell me that one of the midwives had to flip me over, press her finger down right above my vagina bone to try and stop the bleeding,” Graham wrote. “But even though they didn’t want to go into the details at that moment, I looked around the room, saw blood literally everywhere, and let out this deep, visceral cry — an emotional release from the chaos I had just experienced.”

Graham also revealed in her essay that she and her husband endured the very painful experience of a miscarriage before the birth of her twins. “It was devastating; it felt like one of the biggest losses I had ever had in my life to date.” The model reflected on her heartbreak and empathized with other women who understood her suffering. “I just remember breaking down more than a few times, just at random, and thinking, “How do women across the world do this? Because my story is no bigger than anyone else’s.”

Although Graham has been brutally transparent about new motherhood, followers on social media might have never guessed that Graham endured such a difficult postpartum recovery. “I lay on that bed for four straight days. I couldn’t walk for a week. And I didn’t leave my house for nearly two months,” she wrote. The mother of three also gave some behind-the-scenes insight into a surprising Instagram vs. Reality moment. While Graham had proudly shared a picture of her postpartum tummy on social media, she admitted that she was struggling with her body image and confidence in the privacy of her own home and head. “Even now, if I’m completely honest, I go in waves. I am still not entirely comfortable in my body, no matter my own body positivity advocacy,” Graham shared.

Ultimately, it’s Graham’s ability to be unflinching in her truth that transforms this famous mom from a model to a role model. Graham shows women that admitting your deepest vulnerabilities, while incredibly difficult, builds immense strength. And while Ashley Graham is of course known for her outer beauty, it’s her honesty that’s stunning too.

More Like This
Ireland Baldwin Shares Her Abortion Story In An Emotional TikTok
Meghan Markle Calls On Men "To Be Vocal" In The Aftermath Of Roe v. Wade Ending
Ginger Zee Had A Perfect Response After A Troll Asked Her "Who's Raising Your Kids?"
Chris Pratt Says He "Cried" About That "Healthy Daughter" Instagram Post Controversy