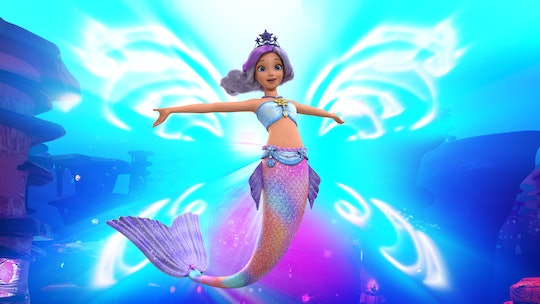 Barbie is headed under the sea in a brand-new Netflix original movie called Barbie Mermaid Power! It stars two Barbies, plus her sisters and new mermaid friends in this cute animated film. Ahead of its premiere this week, Romper has an exclusive clip from the all-new underwater musical adventure, which lands on Netflix on Sept. 1.

In Barbie Mermaid Power, Barbie “Brooklyn” Roberts, Barbie “Malibu” Roberts, and their sisters Skipper, Stacie, and Chelsea transform into mermaids and go on an underwater adventure to help save the world of Pacifica. According to the film’s official logline, “Barbie and Barbie are summoned by Isla (from Dolphin Magic) to compete to be the underwater Power Keeper in a series of challenges designed to find their inner powers. Through these competitions they discover whether they are mermaids of Earth, Air, Water, or Fire, all while making new animal and mermaid friends.”

This tale is all about building strong friendships, embracing a spirit of adventure, and showing bravery even in challenging situations. Kids (and all Barbie-loving adults) will enjoy seeing this movie, which shows firsthand what it’s like to balance the worlds above and below the sea — and finding their inner powers along the way.

A trailer for the new film premiered on Aug. 18, which shows scenes of the mermaids completing challenges, swimming with fish, and discovering the true power within.

Fans were first introduced to the two Barbies (aka, Malibu and Brooklyn) in Barbie: Big City, Big Dreams. Then, they came together for the series Barbie: It Takes Two, which shows the best friends going to school at Handler School of Performing Arts in New York City. Now, they get to be mermaids together in this cute new movie!

In Romper’s exclusive clip of Barbie Mermaid Power, Chelsea, Skipper, and Stacie meet a new mermaid called Aquaryah. The sisters are practicing handstands when they accidentally fall. Aquaryah shows them how to do it, explaining that her “special tail” that her dad made helps her balance. It’s a cool moment of inclusivity, with a positive message about how awesome it is to be different.

Can’t get enough of Barbie? You can also stream Barbie & Chelsea The Lost Birthday, Barbie Princess Adventure, and more on Netflix!