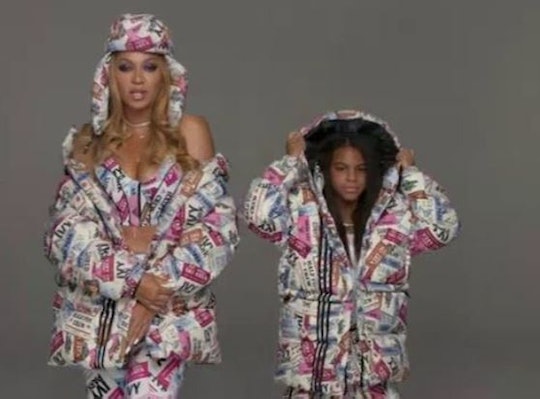 Beyoncé and JAY-Z's 9-year-old prodigy has once again stolen the show. In anticipation of Queen Bey's new Ivy Park line dropping this weekend, Blue Ivy modeled with Beyoncé and slayed every single look.

In a video released for her new "Icy Park" capsule collection with Adidas on Friday, Beyoncé's 9-year-old daughter makes two cameos. In one clip in the beginning, Blue sports a cropped brown Ivy Park jacket, matching mask, and metallic-looking pants from the streetwear collection. She spins around and throws up a peace sign. And in the second clip (starting at 1:31 in the video), she poses next to her mother, twinning in a vibrant graphic jacket and bottoms set.

While Beyoncé's greatness cannot be underestimated or denied, it's Blue who is the real star of this show. "Wow, can’t believe Blue allowed the lady on the left to take part in her campaign," one Twitter user joked. "When icy parks sells out in 30 seconds I’m giving blue ivy all the credit idc," another commented on Twitter.

Beyoncé's mom, Tina Knowles-Lawson, also shared a little behind-the-scenes info about her granddaughter's cameos in the promo. According to Blue's grandma, the young author and Grammy-nominated singer was not even supposed to be in the original campaign, she apparently just "inserted herself."

"My Beautiful grandbaby Blue Ivy looking like a little super model in her Ivy Park. Swing your hair Blue!!!!!" Lawson wrote on Instagram. "She inserted herself into this shoot. No she was not supposed to be in it! She was just hanging out and got dressed and I guess she said 'I'm not gonna tell you what I could do I’m gonna show you."

"I love that aggressive spirit My Blue Blue!!!!" she added with a red heart emoji.