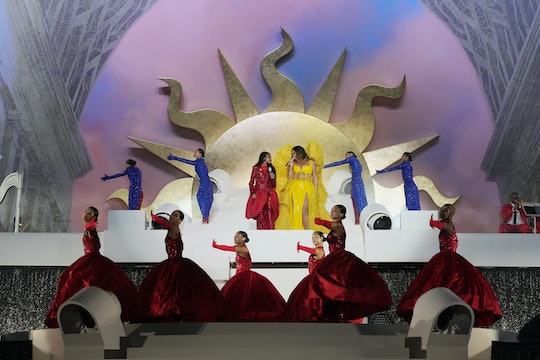 Just a legend and her legacy gracing the stage!

Beyoncé and Blue Ivy have graced us with yet another heartwarming moment on stage together. On Saturday, the 24-time Grammy winner made her epic return to the stage for the grand opening of Dubai’s newest luxury resort, Atlantis The Royal, and Queen Bey’s pride and joy, 11-year-old daughter Blue Ivy, joined her mom on stage to perform their hit song “Brown Skin Girl” for the first time live.

For the performance, Beyoncé wore a lemon-yellow gown with a feathered train by Dubai-based designer, Rayan Al Sulaimani. He told Vogue he worked with her stylist on the sunrise-inspired theme and that the gown took almost a month and a half to finish. Blue Ivy wore a sparkling red suit while singing the introductory notes to “Brown Skin Girl.” The 11-year-old was credited as a songwriter and had her vocals on the track. She was also featured in the 2019 video and won the 2021 MTV Video Music’s best cinematography award for it, making her the youngest VMA winner ever. What’s more, this was the first time the mother-and-daughter duo had performed the song live.

But this isn’t the first time the two have shared the stage together. Last March, Beyoncé aired a pre-taped Oscars performance of her song “Be Alive” from the movie King Richard. Blue was one of her dancers.

This live performance, however, was full of adorable mother-daughter moments. In one clip of shared by content creator, Katherine Harris, Blue Ivy does a little improv moment and Beyoncé gently halts her and then caresses her braids. “Beyoncé told Blue Ivy “Not too much” .. We need another $24million for your choreography,” Harris joked on Twitter. But that’s reportedly the price tag the hotel paid Mrs. Carter for the private concert.

Overall, the singer performed 18 songs, according to Essence, including “Spirit,” “Freedom,” “Beautiful Liar,” and a Fifty Shades of Grey version of “Drunk In Love.” The Dubai spectacle was Beyoncé’s first live show since her 2018 Coachella performance, known as “Beychella” by her fans. It was also her first show since the debut of her newest album, Renaissance, and her Kobe and Gianna Bryant tribute set in 2020.

The Dubai show was also a family affair. Her husband JAY-Z, her mother Tina Knowles-Lawson, her father Matthew Knowles, and 5-year-old twins, Rumi and Sir were all in the audience. “My parents are here tonight,” she said while welcoming the crowd and introducing her band, according to Essence. “My mother and my father. My beautiful children are here tonight, to watch their mother perform. And of course, my beautiful husband.”