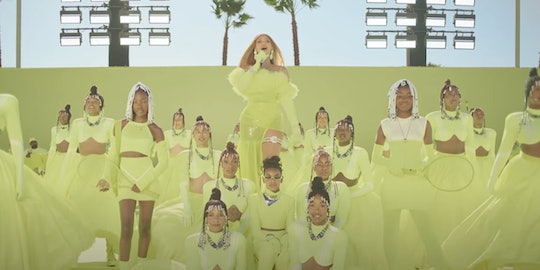 Blue Ivy Performed At The Oscars With Her Mother Beyoncé

Blue Ivy just nailed her first Oscars performance and she hasn’t even gotten a driver’s permit yet!

In pure Ivy fashion, Blue Ivy Carter nearly stole the spotlight again when she joined her mother Beyoncé during her opening Academy Awards performance of “Be Alive.” The Oscar-nominated song is from the soundtrack of the nominated flick, King Richard.

The 10-year-old was among the ensemble of lime green musicians and dancers in sunglasses and Venus braids. Blue Ivy also performed a dance routine which the Beyhive took notice of and immediately started reacting on Twitter.

“Did y’all see BLUE IVY getting in her eight counts?!!” one fan tweeted.

“Look at Beyoncé’s manager SHOWING YOU ALL HOW IT’S DONE!! That’s my Queen BLUE IVY,” another Beyhiver tweeted.

Beyoncé co-wrote “Be Alive” artist Dixson and the song marked her first Oscar nomination. The performance took place on a tennis court in Compton, the hometown of Serena and Venus Williams, who introduced the global superstar from the Dolby Theatre in Hollywood.

This is far from the first time Blue has made an appearance beside her mother. She has been making cameos in Ivy Park campaigns for the past two years and most recently her parents’ campaign for Tiffany.

It seems there’s nothing Blue Ivy can’t do. In fact, her grandmother, Tina Lawson, who calls Blue her “little Capricorn twin,” said as much in an Instagram post for her 10th birthday. “Blue is one of those rare gifted people that can do everything well!” A rare gift indeed!