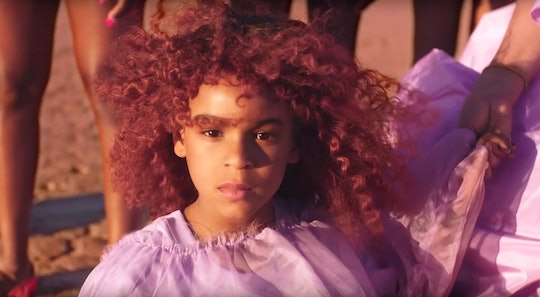 Blue Ivy Carter Made History At The VMAs

Another #blackgirlmagic alert from Blue Ivy! The 9-year-old has become the youngest winner in MTV VMA history!

Blue Ivy Carter has once again made history, this time at the 2021 MTV Video Music Awards. On Sunday, the 9-year-old daughter of Beyoncé and JAY-Z won the best cinematography award for her part in her mom’s hit song “Brown Skin Girl,” making her the youngest winner in VMAs history.

Beyoncé’s “Brown Skin Girl” features opening lyrics that were written and sung by Blue Ivy. The song appeared on the 2019 visual album, The Lion King: The Gift. Alongside her superstar mom, Blue also shares the win with collaborators Wizkid and SAINt JHN. Making this win even more impressive, Blue Ivy beat out stars including Billie Eilish, the Foo Fighters, Justin Bieber, Chance The Rapper, Lady Gaga, and Lorde.

Sunday’s win at the VMAs is just the latest addition to the young girl’s growing and impressive resumé. Last year, for instance, Blue Ivy became the youngest BET Award winner ever at the age of 8. And earlier this year, she became the youngest Grammy winner after she took home the “Best Music Video” award, which she celebrated with a gold sippy cup paying homage to her father, JAY-Z. “I’m so proud of you and I’m so honored to be your mommy,” Beyoncé praised her daughter during her acceptance speech at the Grammys.

The 9-year-old — who is a big sister to her twin siblings, Rumi and Sir — is already an empire in her own right. (Really, a recent study estimated that Blue is the third richest kid in the world and is set to inherit a nice little fortune from her parents.)

Blue’s growing list of accomplishments for “Brown Skin Girl” can likely be credited back to her parents’ unwavering support. As Beyoncé told British Vogue in a December 2020 interview, “I let my children know that they are never too young to contribute to changing the world. I never underestimate their thoughts and feelings, and I check in with them to understand how this is affecting them.”

As for the popularity and love for “Brown Skin Girl,” Beyoncé told British Vogue in the same interview that she’s one proud mom. “Blue saw some of the reactions to the ‘Brown Skin Girl’ video, as well as some of the videos from the philanthropic work I’ve done this year,” she told the magazine. “When I tell her I’m proud of her, she tells me that she’s proud of me and that I’m doing a good job. It’s teeeeeew much sweetness.”