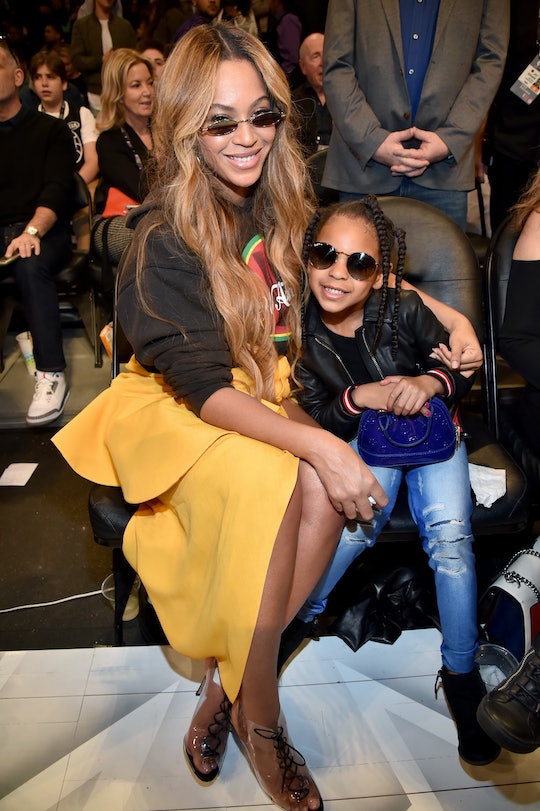 Beyoncé Blessed Us With Her "Best Advice" For Parents Right Now

When Queen Bey is not slaying us with history-making performances and culture-defining artistry, she's a mom of three to her 8-year-old daughter Blue Ivy and 3-year-old twins, Rumi and Sir, with husband JAY-Z. And as a mom in the public eye and adored public figure by all, Beyoncé shared her advice for fellow parents during this especially difficult year in a recent interview.

During a new interview with British Vogue's editor-in-chief Edward Enninful, Beyoncé discussed everything from family to her own personal joys and growth she's experienced this past year. She also touched on how quarantine life and the racial unrest in the United States have impacted her children. Specifically, Enninful asked the 39-year-old supermom how she talks to Blue Ivy about "current events" and what advice the singer would share with parents who are "trying to impart the hard realities of our time to their children?"

"Blue is very smart, and she is aware that there is a shift, but it is my job as a parent to do my best to keep her world as positive and safe as can be for an 8-year-old. My best advice is to love them harder than ever," Beyoncé told Enninful. "I let my children know that they are never too young to contribute to changing the world. I never underestimate their thoughts and feelings, and I check in with them to understand how this is affecting them."

During her Q&A cover interview for the December issue of British Vogue — titled "An Audience With Beyoncé" — Queen Bey also shared that she's just like all of us by "always losing" her phone and the heartwarming detail that her oldest daughter is as proud of her mother as she is of her. "When I tell her I’m proud of her, she tells me that she’s proud of me and that I’m doing a good job," she told British Vogue. "It’s teeeeeew much sweetness. She melts my heart. I believe the best way to teach them is to be the example."

And never one to shy away from celebrating Black culture, Beyoncé also spoke with the magazine about the cultural significance of her most recent visual album, Black is King on Disney+, and the legacy she hopes it will leave behind for her son and other Black boys like him. "I felt it was important to uplift and praise our boys and to assure that they grow up with enough films, children’s books and music that promote emotional intelligence, self-value and our rich history," she told British Vogue. "That’s why the film is dedicated to him."

At the end of the Black Is King, which premiered in July 2020, the following message appears along with a photo of Sir: "Dedicated to my son, Sir Carter. And to all our sons and daughters, the sun and the moon bow for you. You are the keys to the kingdom."

Beyoncé often includes her children in her work. Just recently, in fact, Blue Ivy shined in her mom's latest promo video for her Ivy Park x Adidas line. And over the summer, Blue, Rumi, and Sir all made appearances in Black Is King, Beyoncé's visual album based on The Lion King. The superstar also sang with her oldest daughter in her hit song, "Brown Skin Girl," for the live-action remake of The Lion King, which she starred in as Nala.

While Beyoncé doesn't often discuss motherhood or embraced the TikTok mom title during quarantine, it's clear she makes it a priority to be there for her kids, no matter how busy she is or what's going on in the world. As she told Elle in 2019, "I think the most stressful thing for me is balancing work and life. Making sure I am present for my kids — dropping Blue off at school, taking Rumi and Sir to their activities, making time for date nights with my husband, and being home in time to have dinner with my family — all while running a company can be challenging. Juggling all of those roles can be stressful, but I think that’s life for any working mom."