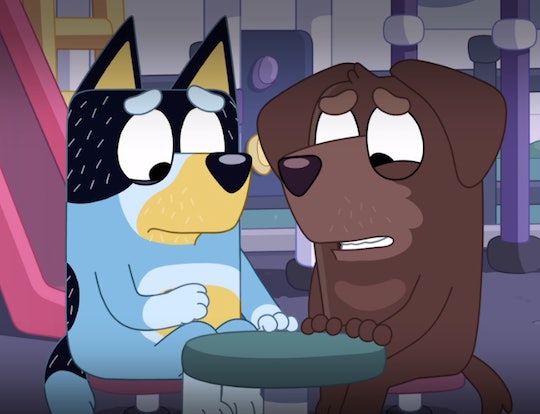 Who knew Bluey could be so profound? In a seven-minute episode called “Cafe” from Season 2, the Heeler family managed to capture the intense and relatable awkwardness of trying to make friends on the playground. The popular Australian kids’ show also accurately portrayed how much more fun a visit to the park can be if you have a fellow parent to hang out with, so essentially this was seven minutes of fairly brilliant and incisive television writing for a children’s show.

Season 2, Episode 35 of Bluey finds the young blue heeler heading off to the park with her dad before breakfast. Her little sister Bingo stayed home with her mom because she wanted to sleep in, so it was just Bluey playing on her own while her dad, Bandit, sat on a bench. Until a new kid named Winnie arrived with her dad and instantly became friends with Bluey. The two played “Cafe” and asked their dads to be customers. The two adults start off reluctant but end up getting along well. Bluey figures it’s kind of perfect until Winnie invites them to breakfast and her dad says “no.”

A few days go by, a routine at the park begins to set in. Bluey and her dad join Winnie and her dad at the park. They play “Cafe” together. Bluey tries to get her dad to become friends with Winnie’s dad but he’s reluctant. Nervous. Not sure he’s quite there yet. So basically, every parent who has met a potential friend at the park with their kids and doesn’t quite know where to start.

As we see in this episode of Bluey, trying to make friends as a parent is stressful. Unlike little Bluey and Winnie, who immediately take off playing together and end their time at the park with a hug, parents can have a tough time making the first move towards friendship. The fear of rejection gets stronger as we get older, as does the worry that we might somehow embarrass ourselves or our potential new friend and therefore ruin the fledgling relationship before it even begins. When Bluey eventually asks Winnie’s dad if he likes her dad and admits that her dad likes him, even I felt nervous for the cartoon dogs.

Fortunately, it all turns out. Bluey’s dad invites his new friend for breakfast with a lot of encouragement from his family and he accepts. They head off into the morning sun together, and I would be lying if I said it didn’t make me a bit emotional. Parent friendships, even though they can be tough to make, are truly the best.

You can watch this episode of Bluey on Disney+.