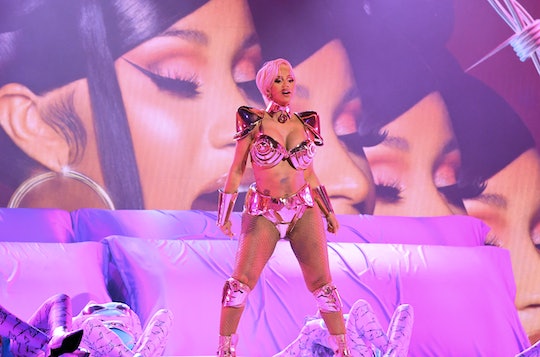 The rapper hit back with a reminder that it’s not her job to “monitor” what other parents’ kids are watching.

Cardi B has a few words for parents who continue to criticize her music. In the simplest terms: it’s not her job to monitor what other kids hear or see on TV. In a response to a tweet criticizing her performance of “WAP” at the Grammys, Cardi B hit back with a reminder that PG means “parental guidance.”

The 28-year-old rapper teamed up with rapper Megan Thee Stallion and performed their song “WAP” at the Grammy Awards this past Sunday. Cardi B, whose real name is Belcalis Marlenis Almánzar, started her performance with her single “Up” and then transitioned to “WAP.” The performance included pole dancing and the two women climbing on a bed and dancing on each other. While many fans praised and enjoyed the performance, others condemned it. One comment in particular caught Cardi’s eye.

Errol Webber, candidate for California governor, wrote on Twitter that Cardi B “knows right from wrong.” “Cardi B cuts off WAP when her daughter, Kulture, walks into the room,” Webber tweeted along with a video of Cardi B that went viral earlier this year. In the video, the rapper is jamming out to her hit song and cuts the music when her 2-year-old daughter Kulture walked in. “She looks embarrassed. This is how you know Cardi B knows right from wrong, yet STILL deliberately chooses to do wrong by gyrating and scissoring her WAP on national TV... in view of other people’s kids,” Webber tweeted.

The “Bodak Yellow” rapper retweeted his comment with a response: “The Grammies are PG. That means parental guidance. Meaning is your job like it is to mine to my child to monitor what they watch. My performance was around 10 pm on a Sunday. Your child should be in bed ready for school the next day why are they up watching Wap?

This is not the first time Cardi B has responded to backlash from parents about her music. Back in January, when that video of Kulture walking in while “WAP” was playing went viral, it became a super, relatable mom moment. And although the rapper turned it off immediately when she saw the toddler, mom-shaming came from all directions.

“I don’t make music for kids I make music for adults,” she responded to one critic on Jan. 4. “Parents are responsible for what their children listen too or see. I’m a very sexual person but not around my child just like every other parent should be.”

Cardi B is not the first celebrity to point out that it’s not her responsibility to raise other parents’ children. For example, during a 2003 interview, Diane Sawyer told Britney Spears she had “upset a lot of mothers in this country” after mentioning that then-Maryland First Lady Kendel Ehrlich said if she had the opportunity “to shoot” Spears that “she would.”

"Well that's really sad that she said that... I'm not here to, you know, babysit her kids,” Spears told Sawyer.

As for Cardi B, she’s admitted that she struggles with parents labeling her as a role model for their kids. In an April 2019 tweet, the rapper said she felt trapped and sad because of the “role model” expectations people had put on her. “For these past two years I been watching what I say and I haven’t been myself,” she tweeted at the time. But in a recent interview with Harper’s Bazaar, Cardi said she can still be a role model and stay authentic to herself.

"Am I a role model? I know I'm a role model because I know there's a lot of women like me," she told the magazine. "At the end of the day, I know I'm a bi**h that made it through because I work my a** off, not because luck fell on my thighs." And if that’s not a “Periodt” point for Cardi opposers, take a look at the Family Guy clip she recently posted on her Instagram.