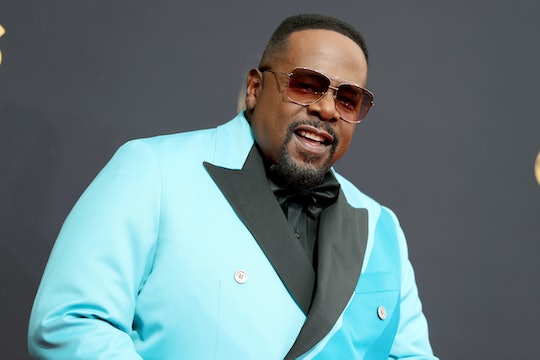 “Who else is going to teach them how to dance?”

Although Meghan Markle and Prince Harry weren’t at the 2021 Emmy Awards, the royals were certainly on host Cedric the Entertainer’s mind. With The Crown taking home a number of awards, it seemed only fitting that his opening monologue would include a few jokes about what he called “the real tea,” aka the Sussexes’ explosive interview with Oprah Winfrey and the details they shared about their decision to step down from their senior roles in the royal family. There were a number of topics to touch on, but perhaps the best was when Cedric the Entertainer joked that the royal family needs their son Archie to teach them how to dance on TikTok.

“I mean Charles can’t dance!” he joked. “Who else is going to teach them how to TikTok?”

After rapping during a fun opener at the awards show, Cedric the Entertainer joked about a number of culturally relevant topics, like the ongoing coronavirus pandemic and the search for a new Jeopardy host. Then he turned his sights to the royal family, calling The Crown a “great show” and noting that “it’s embarrassing to the real monarchy.” “[Prince Harry] renounced his throne quicker than Eddie Murphy did in Coming To America,” he joked.

He then brought up the allegations made by Meghan and Harry during their interview when they told Winfrey that members of the royal family were allegedly concerned about how “dark” their son’s skin would be before he was born. But, according to Cedric the Entertainer, the royal family should needs Archie, if only to teach them TikTok dances.

“Little Archie, they need little Archie,” he joked, touching on the fact that Meghan and Harry’s oldest child would have teach his great grandma, the Queen of England, how to dance. The show’s host even threw in his own TikTok moves to emphasize the joke.

Archie, who is only 2 years old, has already danced in front of cameras with his mom during one of his first appearances, so he probably has gained some serious dance moves in the years since then. Who knows, maybe he’ll be teaching them the “Alors on Dans” dance this Christmas?