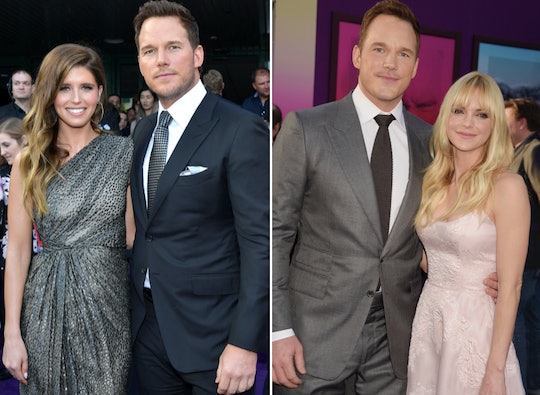 People are calling him out for praising his daughter with Katherine Schwarzenegger as “healthy.”

Three days ago, Chris Pratt posted a lengthy tribute to his wife Katherine Schwarzenegger on Instagram. He was ostensibly celebrating her six weeks ahead of her birthday, but the post attracted a mini-firestorm of attention for entirely different reasons. While the actor did not directly mention his ex-wife Anna Faris or their son Jack, one line in particular seemed to many critics to be an implicit dig at his first wife and their child. By yesterday, Faris’ name was trending on Twitter as many leapt to her defense.

Pratt’s post began with an ode to Schwarzenegger: “Guys. For real. Look how she’s looking at me! I mean. Find you somebody that looks at you like that!! You know!? We met in church,” Pratt’s post began. But it was this line that upset some people: “She’s given me an amazing life, a gorgeous healthy daughter,” referring to his 1-year-old daughter Lyla with Schwarzenegger.

Chris Pratt has everyone mad.

You see, Faris and Pratt, who announced their divorce 2017, are parents to 9-year-old son Jack. Their little boy was born two months early and suffered some medical issues as a result. “Jack had a few surgeries — he had a few hernia surgeries, he’s had a few eye surgeries and he had a little heart issue as well,” Faris shared about Jack’s health as a baby on her Unqualified podcast in 2018.

Now some fans have concluded that Pratt’s inclusion of the word “healthy” in his recent post was meant to throw shade at his son and first wife. Their intentions may be good in leaping to Faris and Jack’s defense, but they have ended up pitting Pratt’s first wife against his second.

“Chris Pratt can keep his amazing wife and her Stepford Wife stare,” wrote one Twitter user. “I'll focus on Anna Faris and her adoration for her beautiful boy.”

“While he consistently gushes about his wife & healthy daughter, the only mention I see of his son w/health issues is about what a great stepmom Katherine Schwarzenegger is,” another wrote. “Anna Faris def dodged a bullet with this one.”

Another Twitter user brought Pratt’s apparent commitment to religion into the mix along with his ex-wife and son, “You claim to be a man of God. But this inexplicable random post complimenting your wife for giving you a healthy daughter? Who do you think you are? God gave you two that daughter- not Katherine, and God gave you and Anna Jack too. They are equally beautiful.”

Faris might have appreciated the intent of her defenders, but she didn’t ask to be part of this narrative, nor to be a trending topic on Twitter because of her ex-husband’s gushy post to his second wife. If she paid attention to any of this, it may well have been unpleasant to find herself and her son — and his medical conditions — discussed extensively on social media. She had no more control over this conversation than she did over the content of Pratt’s Instagram post. And neither for that matter, did Schwarzenegger (who should definitely still get a birthday present, by the way).

Whatever Pratt did or didn’t mean by his message to his wife is on him; it has nothing to do with either Schwarzenegger or Faris, and certainly doesn’t have anything to do with his children. Both his ex-wife and his current wife are moms, and the last thing this world needs is to see more moms being needlessly compared to each other.

While Pratt did not directly address the backlash, he took to his Instagram Story on Friday and shared a cryptic message, perhaps in response to the criticism, saying he “woke up this morning feeling depressed and crappy” before heading outside for a run with his “Christian music playlist.”