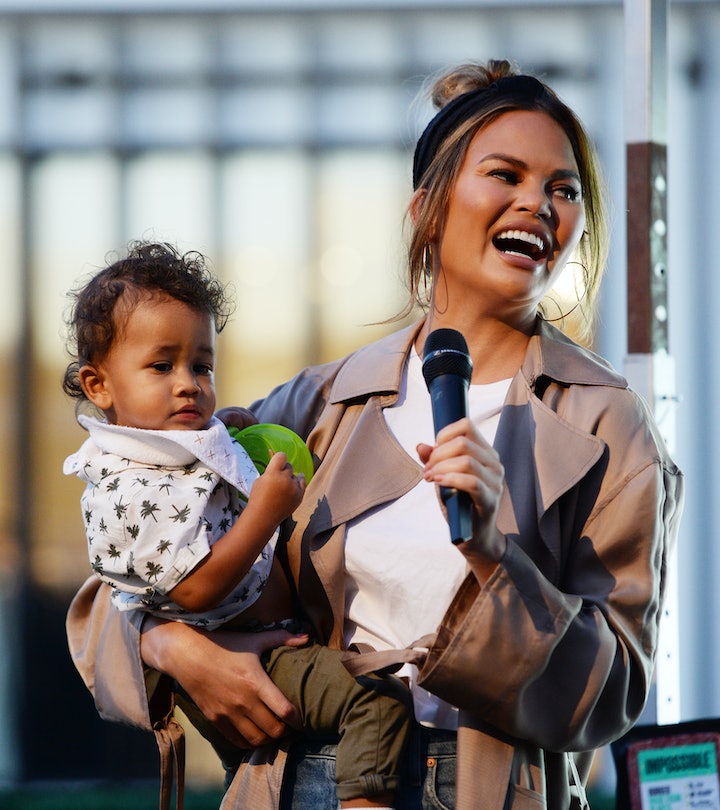 Parents are often called out for taking more photos of their first child than their second. It’s one of those old tropes that has become a bit of a joke. But, at least in this case, there is a reason why mom of two Chrissy Teigen posts more photos of Luna than Miles. It is not a first child/second child scenario this time around. It’s more a case of personalities. And it seems like both kids are real little personalities, it’s just that one of them is not a big fan of pictures. Extremely not a fan, one could even say.

The Cravings cookbook author’s daughter Luna turned five on Wednesday, and naturally the ocassion called for several photos and videos of her big day shared on Instagram. In every single photo, Luna had a big smile on her face. Whether she was taking part in a scavenger hunt as part of her “Yes Day” festivities, posing with her dad John Legend, or just hanging out with her mom in their matching turquoise tiaras, Luna looked like she loved the camera.

Her 2-year-old brother Miles, on the other hand, was only evident in one family group shot. On Thursday, Teigen addressed the issue. She shared a fresh batch of photos of Luna from the scavenger hunt with the caption, “scavenger hunt all through the island to get to ZOMBIESSSSS - her dream birthday! ‘Why do you post Luna so much more’ you ask? Because Miles hates pictures and he’s always butt a** naked.”

Then she followed up with a video of herself trying to take her son’s photo to prove it.

Miles is apparently not a fan of photos.

Teigen captioned the video, where Miles is lounging with some headphones and immediately squeezes his eyes shut when he sees her, “here is what getting a picture of miles is like.” Photographer Alex Lau backed Teigen up in her assertion that Miles doesn’t like his photo taken with his own story, “Will never forget having to hold a laptop of cartoon car crashes over my head while shooting so he'd look at the camera.” Miles is rather famously a big fan of cars, especially Lightning McQueen. So much so that he wore a shirt in homage to the famous car when he crashed his mom’s “thirsty” topless photo shoot last month.

For Miles, an apparent fan of cars and nakedness, perhaps it was just a perfect storm of photo opportunity. At least it gave his mom the chance to post another photo of him.