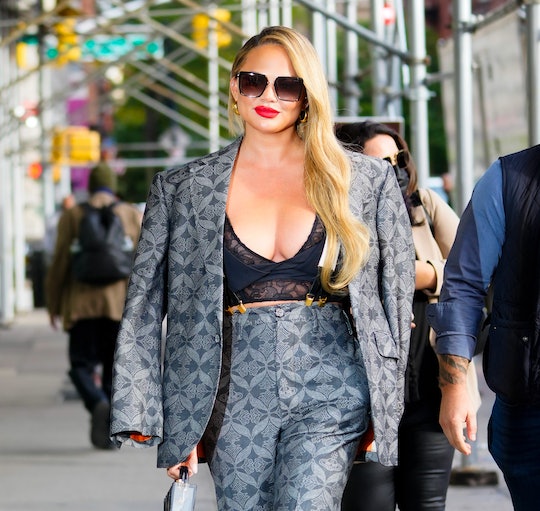 Hormones, am I right?

You might think that the author of a cookbook called Cravings would have some pretty delicious pregnancy cravings. Chrissy Teigen is, after all, rather famous for her excellent palate and love for delicious food. But it seems this time around, she’s gone a different way. Teigen has been watching Gordon Ramsey’s series Kitchen Nightmares and finding the questionable food surprisingly appetizing. Hormones, am I right?

Teigen and her husband John Legend announced earlier in August that they are expecting another baby together and a sibling for 6-year-old daughter Luna and 4-year-old son Miles. “The last few years have been a blur of emotions to say the least, but joy has filled our home and hearts again. 1 billion shots later (in the leg lately, as u can see!) we have another on the way,” the mom of two wrote on Instagram at the time.

While she didn’t share how far along she was in her pregnancy, she did share just a few weeks later that she was at her “least favorite” stage and she is just ready to be “huge.” And now we have another clue as to how far along she might be; Teigen is also “at the pregnancy stage where everything on kitchen nightmares actually looks pretty tasty,” she wrote on Twitter on Wednesday.

Kitchen Nightmares is a reality series where chef Gordon Ramsey travels to failing restaurants to help them turn their luck around. The food at these restaurants tend to be... well, let’s just say sub par. And yet, there sits Chrissy Teigen. A bestselling cookbook author in her own right. Checking out some of the menu items and thinking they sound pretty tasty. Like, for instance, “‘Blue cheese on a burger with mushroom and onion and truffle and cheese on a soggy bun!?!! That’s too much!!!’ wait that sounds awesome lol,” Teigen tweeted. Although one recipe was a bridge too far, even for pregnancy cravings. Trout parmesan. Even she couldn’t get behind that mixture, and the video of the dish was enough to turn anyone’s stomach.

This isn’t the first time Teigen’s pregnancy cravings have descended into a dark place. She has tried everything from sour fruit chews to corned beef and cabbage to fried pork rinds. And obviously thrown a little McDonald’s into the mix along the way. Teigen is trying everything and anything with her pregnancy cravings. And why not?