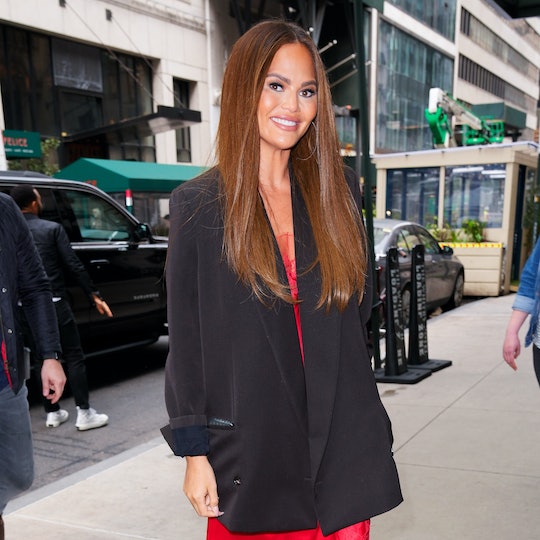 She revealed she’s in her “least favorite” pregnancy stage.

Every person who has been pregnant probably has a favorite trimester, at least if they’re lucky. A time in their pregnancy when they’re feeling good and hopefully glowy and healthy. This is not that time for Chrissy Teigen. The expectant mom shared a new selfie to document her “in between stage” of pregnancy, and she admitted that it’s her “least favorite.”

The Cravings cookbook author announced at the beginning of August that she and husband John Legend are expecting a little sibling for 6-year-old daughter Luna and 4-year-old son Miles. “The last few years have been a blur of emotions to say the least,” she wrote in an Instagram post featuring her baby bump, “but joy has filled our home and hearts again. 1 billion shots later (in the leg lately, as u can see!) we have another on the way.”

A few weeks later, Teigen is back with another baby bump photo. And it seems she’s getting pretty impatient as she captioned the photo, “the in between stage is my least fun stage. just be huge already please !!!!”

Teigen has not yet shared when she is expected to give birth, nor has she shared any other details about their baby on the way. Although she did share a hilarious ultrasound photo of her little one looking like they were holding their hand to their chest in shock with the message, “Me hearing the FBI raided Mar a Lago.” Anything to get in a dig at former President Donald Trump as is her habit. Teigen could be in her second or early stages of her third trimester, who knows? All we know for now is that she is ready to hit the stage where she can “just be huge” and hey, to each their own.

Teigen’s pregnancy comes roughly two years after she suffered a pregnancy loss with the couple’s son Jack in 2020. She alluded to that loss in her pregnancy announcement, noting that “every appointment I’ve said to myself, ‘ok if it’s healthy today I’ll announce’ but then I breathe a sigh of relief to hear a heartbeat and decide I’m just too nervous still. I don’t think I’ll ever walk out of an appointment with more excitement than nerves but so far, everything is perfect and beautiful and I’m feeling hopeful and amazing.”

It was such a difficult, life altering time for both Teigen and Legend. Teigen got sober after her pregnancy loss, and Legend channeled his grief into a new album. So how wonderful is it to see Teigen now, growing in her pregnancy. And just wanting to be huge.