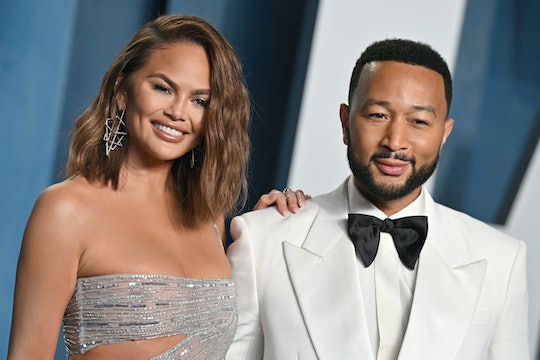 “The last few years have been a blur of emotions to say the least, but joy has filled our home and hearts again.”

The Teigen-Legend household is growing by one more and is filled with joy right now. On Wednesday, Chrissy Teigen announced on Instagram that she is pregnant again and expecting another baby with her husband John Legend. The Cravings: All Together cookbook author shared a mirror selfie that showcased her growing bump, as well as bruises on her leg from IVF shots.

“The last few years have been a blur of emotions to say the least, but joy has filled our home and hearts again. 1 billion shots later (in the leg lately, as u can see!) we have another on the way,” Teigen began her pregnancy announcement on Instagram.

Teigen’s announcement comes almost two years after she and Legend lost their son Jack in October 2020 at 20 weeks due to pregnancy complications. Teigen had been hospitalized for heavy bleeding with Jack and was very candid with her social media followers throughout that very difficult time — and her journey with grief. In February 2021, Teigen, who also shares 6-year-old daughter Luna and 4-year-old son Miles with Legend, told Ellen DeGeneres that Jack had “saved” her, leading her to discover “therapy and then sobriety.” And in July of this year, she celebrated one year without alcohol.

While Teigen did not share many details about this pregnancy, she admitted she’d been feeling “nervous” to make the announcement but is also happy to report that “everything is perfect and beautiful.”

“Every appointment I’ve said to myself, ‘ok if it’s healthy today I’ll announce’ but then I breathe a sigh of relief to hear a heartbeat and decide I’m just too nervous still,” she added on Instagram. “I don’t think I’ll ever walk out of an appointment with more excitement than nerves but so far, everything is perfect and beautiful and I’m feeling hopeful and amazing. Ok phew it’s been very hard keeping this in for so long!”

Earlier this year, Teigen shared that she was “balls deep in another IVF cycle” and asked her followers to stop asking her if she was pregnant as she went through the process. “I wanted to let you guys know I’m balls deep in another IVF cycle to save as many eggos as I possibly can and hopefully make some strong, healthy embryos,” Teigen wrote on Instagram in February 2022. “I honestly don’t mind the shots…they make me feel like a doctor/chemist…but the bloating is a b*tch, so I humbly beg you to stop asking if I’m pregnant because while I know it’s said with excited, good intentions, it just kind of sucks to hear because I am the opposite of pregnant!”

Now, six months later, Teigen can happily announce that she is pregnant again. And her Instagram followers were quick to share their congratulations and excitement for the growing family in the comments of her reveal.

As for Luna and Miles? They celebrated their little sibling on the way by dressing up in a T-Rex costume and rainbow leotard.