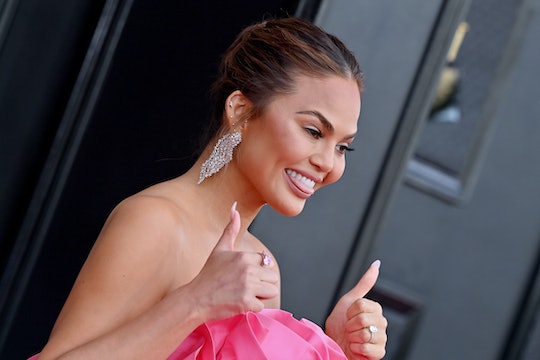 “Me hearing the FBI raided Mar a Lago.”

Leave it to Chrissy Teigen to find a way to make an ultrasound picture funny. The pregnant cookbook author shared an ultrasound photo of her new baby on the way on Instagram, and instead of getting all emotional and introspective she went the hilarious route. As per usual.

Teigen took to her Instagram Story to share her new baby’s ultrasound photo, where the baby appeared to be holding its hand to its chest in surprise. “Me hearing the FBI raided Mar a Lago,” she captioned the photo, referring to recent reports that the FBI had executed a search warrant on the former president’s private home in Florida on Monday.

Fans of the expectant mom, who also shares 6-year-old daughter Luna and 4-year-old son Miles with husband John Legend, are familiar with her particular brand of humor. Especially as it pertains to the former president, who once famously blocked her on Twitter for tweeting that nobody liked him.

In a way, it’s a sign of Teigen’s genuine happiness that she’s making jokes even as she shares her ultrasound photo. Teigen has been candid with her struggles and grief in the months after suffering the loss of the couple’s son Jack in 2020 at 20 weeks gestation.

The former model announced that she and her husband were expecting again on Aug. 3 with a glamorous photo shoot featuring her baby bump. “the last few years have been a blur of emotions to say the least, but joy has filled our home and hearts again. 1 billion shots later (in the leg lately, as u can see!) we have another on the way,” she wrote on Instagram, referring to her recent IVF journey. “Every appointment I’ve said to myself, ‘ok if it’s healthy today I’ll announce’ but then I breathe a sigh of relief to hear a heartbeat and decide I’m just too nervous still. I don’t think I’ll ever walk out of an appointment with more excitement than nerves but so far, everything is perfect and beautiful and I’m feeling hopeful and amazing. Ok phew it’s been very hard keeping this in for so long!”

Now that she is finally able to share her pregnancy joy with her followers, Teigen seems more relaxed. Happy. And ready to roast Donald Trump, as is her nature.

More Like This
Chrissy Teigen Says Her Pregnancy Cravings Are "Comical At This Point"
Hilary Swank Announced She's Pregnant With Twins & Shared A Cute Video Of Her Bump
Barack Obama Says He "Won The Lottery" When He Married His Wife Michelle 30 Years Ago
Lifelong Teacher Dr. Jill Biden Loves Watching Abbott Elementary Too