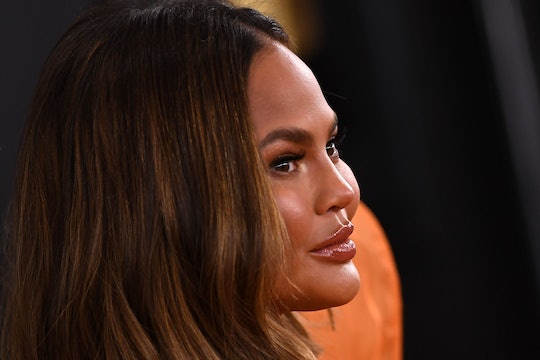 After suffering a heartbreaking pregnancy loss in October, Chrissy Teigen reflected on her son Jack's due date in an emotional post on Twitter. In her tweets, she shared that she's been experiencing some movement in her belly that feels "exactly like baby kicks" and those feelings naturally have her thinking about the baby boy she was so looking forward to welcoming into her family.

Teigen has been relatively active on social media recently, keeping us entertained with posts about her 4-year-old daughter Luna's karate class and her own efforts with becoming a bit of a horse person. But it has not been so very long since she disappeared completely from social media following the heart-wrenching loss of her pregnancy with a baby boy she and husband John Legend had planned to name Jack.

"We are shocked and in the kind of deep pain you only hear about, the kind of pain we’ve never felt before," Teigen wrote on social media after she had lost Jack, along with some personal, raw photos of her experience.

Four months later, Teigen is reflecting on that loss again. "My little jack would have been born this week so I'm a bit off,"she wrote on Twitter. "I truly feel kicks in my belly, but it's not phantom. I have surgery for endometriosis tomorrow...but the period feeling this month is exactly like baby kicks. sigh."

Chrissy Teigen is thinking about baby Jack on his due date.

In a follow-up tweet, Teigen shared a video of her belly moving. "Look at this," she captioned the video. "I’ll pretend it’s him saying hi - it never stops."

Feeling baby kicks, or "phantom kicks" as they are sometimes called, after a pregnancy is a common occurence for many women, although there is very little data on the cause. According to the National Library of Medicine, a survey of 197 women who had given birth found that 40% experienced "real kicks," that felt similar to pregnancy kicks as well as "flutters" like Teigen experienced. Some women reported experiencing these kicks up to 28 years after giving birth.

Several moms took to Teigen's social media feed to share their own experiences with phantom kicks. "For months after I had the same movement as you show on this video," one woman shared with Teigen on Twitter. Another woman who experienced pregnancy loss had her own explanation for the fluttering. "It’s been 10 years for me (and 3 more babies who got to stay on earth) and anytime I feel things like that, it’s my late daughter saying hi," she tweeted.

As Teigen prepares to head in for surgery for endometriosis — a common and painful disorder in which tissue grows outside the uterus — some wondered if the "kicks" she's been experiencing might be related. OB/GYN Dr. Jessica Shepard told Women's Health it's not common to experience such a feeling, but endometriosis can lead to "cramps can have a kicking and punching feel when very severe."

Ultimately, the loss of baby Jack and the reminder that he was due to be born this week has left Teigen feeling "anxious and sad," as she tweeted on Wednesday, something many women who have gone through pregnancy loss understand all too well.