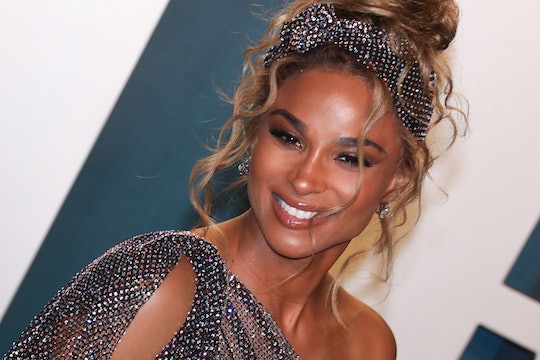 Ciara Has Everyone Gushing Over Her Baby Boy Saying "Mama"

Practice makes perfect, and can even melt a few hearts in the process. In an adorable video shared on her Instagram, Ciara's baby boy said "mama" for the first time after a little practice in front of the camera. And, truly, both of their smiles were contagious.

Little Win, who Ciara gave birth to on July 31, smiled and cooed back at the camera, and eventually started making sounds that sounded just like "mama." "Yay! Win you look so surprised," Ciara said when Win belted out a "mama" sound with an adorable baby laugh.

"Momma loves when her baby says MA MA the 1st time:) Haha Da Da," Ciara captioned the video, tagging her husband Russell Wilson, who replied to his wife in the comments and said, "Hahaha he needs to practice 'DaDa' more." Win is the youngest of the Wilson clan, with his sister Sienna, 3, and big brother, Future Zahir, 6.

Ciara's celeb friends like LaLa Anthony couldn't get enough of the cute video. "I loved watching this," Anthony commented, while Cassie, who is expecting her second bundle of joy, left heart emojis.

In an interview with E! News during the 2020 American Music Awards, the "Rooted" singer revealed she worked all the up to her labor. But being super mom ultimately took a toll on her body towards the end. "This pregnant lady needed something to help the mind get through it. And my body was so achy, I thought I was going to need a cane at the end of my pregnancy to be honest," Ciara told E! News. "I was penguin walking throughout the house at the end, but the creativity helped me get through it all and it was a blessing to be able to go to."

But in the end, Win's delivery was "smooth and amazing," she told Access Hollywood back in September. And it seems Win has "winning" in his DNA; not only is his father a victorious quarterback for the Seattle Seahawks, but his name also has meaning.

"Russell would always be like, 'Here's Win shortstop,' he like, plays a whole thing out," Ciara explained during an interview with Entertainment Tonight in August. "And then obviously, Harrison, it was his dad's first name, which is really sweet and precious. There was a lot of love and thought put into it. Russ, we would talk about names, and Russ kind of always had this name Win in the rotation, years ago, before we knew we were having a girl. He had all the good names and Win won."

Maybe the next time we see little Win, he'll be saying "dada."