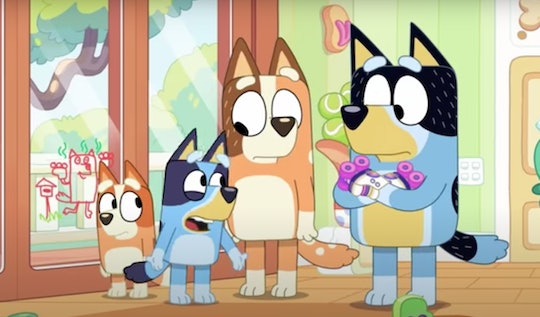 How did Chili and Bandit afford such a great house on their salaries?

When you and your kids watch Bluey, what do you see? A sweet, animated family of blue heeler dogs hanging out in their comfortable home in Brisbane, Australia? Think again. Australian comedian Zach Mander recently took a deep dive into the world of the Heeler family, particularly working parents Bandit and Chili and how they might have managed to afford their easy-breezy lifestyle in such a pricey neighborhood. Could the answer be... crime?

Mander laid out his research in a recent TikTok video. “Here’s what they’re not telling you about the cartoon Bluey,” he said. The Heeler home “overlooks the skyline of Brisbane, Australia,” the comedian noted, adding that an “establishing shot” features a church in Red Hill that “it’s likely that Bluey lives in Paddington,” an upscale neighborhood where houses cost “at least $1 million plus,” Mander found after searching real estate listings for properties in the area.

Fans of the show know that Bluey’s dad Bandit works as an archaeologist while mom Chili works in airport security. “The median pay for both these jobs in Australia is $67,000 and $22 an hour, respectively. There is no way a bank is approving them for a mortgage” of a house worth at least $1 million, Mander surmised. So how did this family manage to get their home?

“We have a couple where one of them has intimate knowledge on how to bypass airport security,” Mander explained, “and the other is regularly digging up rare and expensive items.”

While he doesn’t want to “slander a much-loved cartoon character,” Mander believes that “Bluey’s parents could be up to some nefarious activities.” His theory has already been viewed by more than 1.5 million people on TikTok, so perhaps there’s something there.

In Mander’s defense, the couple does seem to have an awful lot of free time with 6-year-old Bluey and her little sister Bingo, so it’s not like they are working overtime to pay for that $1 million home. In fact, Bandit seems to be home most of the time. Which could well mean he is working part-time hours. So how would they be able to afford a $1 million home, barring a possible inheritance from a family member?

The show runners are apparently not saying. On Thursday, Mander shared an update on TikTok into his “investigation to whether or not Bluey’s family used criminal activity to acquire the wealth to buy their family home” and he has “yet to hear from the show’s creators.”

I’m sure the Heeler family has nothing to hide. But just in case, Mander has called for “Chili and Bandit to release their family tax records so we can put this issue to bed.” Until that time, we all wait with baited breath.