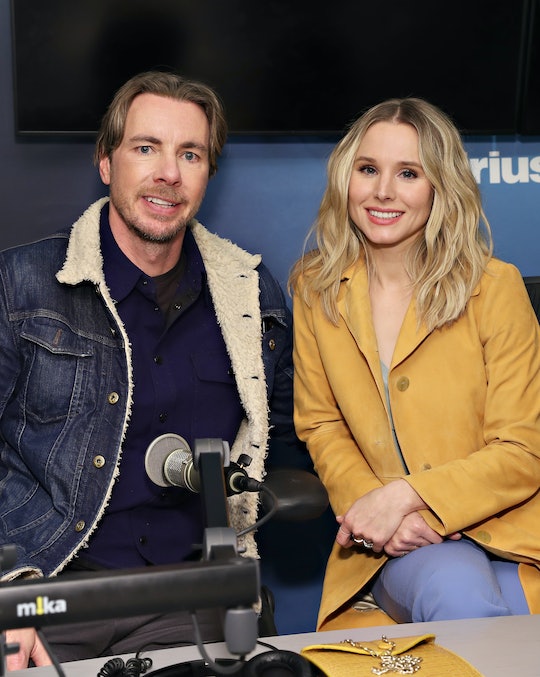 “Once I catch a whiff, that’s biology’s way of letting you know, you need to clean it up.”

Kristen Bell and Dax Shepard have officially entered the “how often do you bathe your kids” chat. Not long after Ashton Kutcher and Mila Kunis went viral for saying they bathe their children when they can “see the dirt on them,” Bell and Shepard have also weighed in on the topic.

In a recent interview on The View, the parents of two girls, 8-year-old Lincoln and 6-year-old Delta, were asked about the “uproar” that follow Kutcher and Kunis’ appearance on Shepard’s podcast Armchair Expert. During the episode, Kutcher said, “Here’s the thing. If you can see the dirt on them, clean them. Otherwise, there’s no point.”

“This actually made me rethink if I’m bathing my child too much,” Meghan McCain said and then asked Shepard, “Do you and Kristen take the same approach and never bathe your children unless there’s dirt on them?”

Shepard and Bell are apparently very much of the same mindset, although that’s not how they got started. “We bathed our children every single night as part of the routine,” Shepard explained, “and then somehow, they just started going to sleep on their own without the routine, and by George, we had to start saying, “Hey, when's the last time you bathed them?’”

“Sometimes five or six days goes on and, I mean, they don’t smell,” Shepard said, with Bell adding, “Well, they do sometimes.”

“I’m a big fan of waiting for the stink,” Bell said during the same interview. “Once I catch a whiff, that’s biology’s way of letting you know, you need to clean it up.” The dad of two, who himself is a big fan of taking road trips with his daughter and belting out Adele’s “Hello” at the top of his lungs, noted that the smell is their “red flag.”

“Honestly, it’s just bacteria,” Bell explained. “Once you get that bacteria you’ve got to be like, ‘get in the tub or the shower.’”

While how often these celebrity parents bathe their kids led to bit of an uproar on social media, the Cleveland Clinic notes that babies and toddlers should bath two to three times per week as their “delicate skin doesn’t need daily cleansing.” And the American Academy of Dermatology recommends bathing kids between the ages of 6-11 once or twice a week, so Shepard’s assertion that they might let five or six days go by seems to pass the smell test.

In addition to how often they tackle bath time, The Good Place actress has been open throughout the pandemic about picking her battles with her kids, whether it’s homeschooling or screen time or even just dealing with her daughter Delta leaving her menacing notes throughout the house. The message she seems to share is always about giving yourself a break as a parent. And that includes waiting to bathe your kids until they stink.