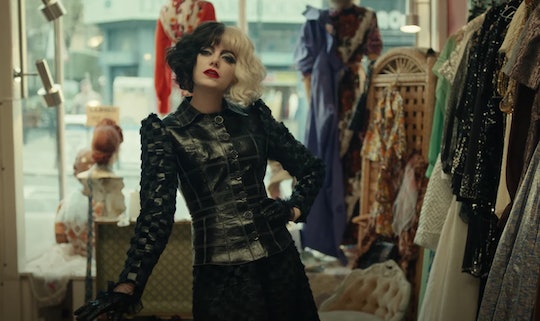 "The thing is, I was born brilliant."

It's been six decades — yes, six! — since we first met Cruella de Vil, the socialite and fashion designer on a dark mission to create a fur coat out of the skins of Dalmatian puppies. Now, the infamous Disney villain has a new story to be told in Disney's new movie with Emma Stone, Cruella. This new live-action prequel will dive deeper into Cruella de Vil's backstory, before she became obsessed with puppies in Disney's One Hundred and One Dalmatians, so here is everything you need to know

What Is Cruella About?

Cruella focuses on Cruella de Vil's rise to infamy in London in the 1970s during the punk rock revolution. Before she was Cruella De Vil, she was Estella de Vil, a young grifter determined to make a name for herself in fashion. According to Disney, this is what you can expect to see in Cruella:

She befriends a pair of thieves who appreciate her appetite for mischief, and together they are able to build a life for themselves on the London streets. One day, Estella's flair for fashion catches the eye of the Baroness von Hellman, a fashion legend who is devastatingly chic and terrifyingly haute, played by two-time Oscar winner Emma Thompson. But their relationship sets in motion a course of events and revelations that will cause Estella to embrace her wicked side and become the raucous, fashionable, and revenge-bent Cruella.

In the original animated version, Cruella de Vil is a fur-obsessed villain who attempts to take two dogs, Pongo and Perdita, and their puppies so she can make herself a coat using their fur. Yes, chilling.

After waiting for what feels like years for a glimpse at the new movie, Disney finally released the trailer for Cruella on Feb. 17. The trailer delivers an ominous vibe and several fashionable outfits, adorable dogs, and fire. It also teases Stone nailing Cruella de Vil's iconic villainous laugh. "The thing is, I was born brilliant," Stone as Cruella de Vil says in the trailer. "Born bad. And a little bit mad. I'm Cruella."

When Does Cruella Premiere?

Cruella is set to premiere in movie theaters on May 28, 2021. However, like other recent Disney movie releases — such as Pixar's Soul and Disney's live-action version of Mulan — there is a chance that it could be released on Disney+, as ScreenRant reported. But for now, plan on making that trip to the movie theaters in May, unless you want to wait for it to be released on Disney+ months after it leaves theaters.

Is Cruella Appropriate For Kids?

Right now, the film is not rated, so it's unclear if it is appropriate for younger audiences. The trailer does show plenty of fire, scary makeup, and a car crashing into a building. Common Sense Media has noted that this film is a "dark retelling" of 101 Dalmatians that "looks to have some scary parts, as well as mature themes."

Although Cruella de Vil plays a heavy role in 1996's 101 Dalmatians, Common Sense Media recommends it for children ages 5 and older, noting that it has some "comedic violence" and that she is often seen smoking a cigarette. In the animated version, cigarette use is prominent, in addition to insulting language like "idiots" and "fools," according to Common Sense Media.

You Can Stream 101 Dalmatians Now

In case you need a refresher on all things Cruella de Vil, there are plenty of ways to familiarize yourself with the villain before watching her origin story.

But you might want to pace yourself — Cruella de Vil is a villain, after all. As the song from 101 Dalmatians goes, "if she doesn't scare you, no evil thing will."

More Like This
Sarah Jessica Parker Brought Her 13-Year-Old Twins To See ‘Hocus Pocus 2’
You Can Stay At A ‘Hocus Pocus’ House On Airbnb — And It’s In Salem!
Here's Where The 'Hocus Pocus' Characters Are 30 Years Later
10 Facts About 'The Nightmare Before Christmas' That May Surprise You