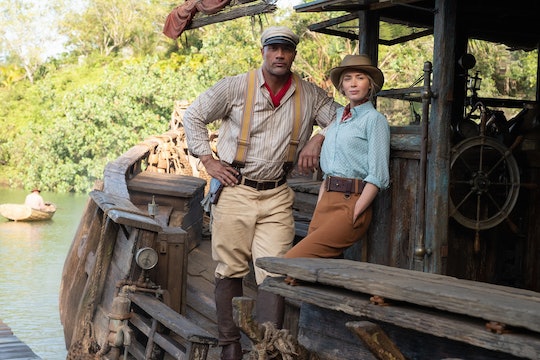 The Rock and a movie based on a ride at Walt Disney World? Sign me up.

If you’re looking for a new adventure film to get you through the last half of the summer, Disney has you covered. At the end of the month, Disney will release Jungle Cruise, starring Dwayne “The Rock” Johnson and Mary Poppins Returns star Emily Blunt, in theaters and on Disney+’s Premier Access. Until then, here’s everything you need to know.

It’s About A Not-So-Relaxing Cruise

Johnson stars as Frank Wolff, the captain of the La Quila, a ramshackle, yet charming boat, who leads Blunt’s character, Dr. Lily Houghton, down the Amazon. Lily is in search of an ancient tree that is rumored to have healing abilities that can change the future of medicine forever and Frank is the only one who can take her there. But the unlikely duo encounters dangers and supernatural forces, as the fate of their lives and the tree remain unknown.

Let’s just say, this Jungle Cruise is not like your ordinary Disney cruise through the Caribbean.

The Trailer Shows The Excitement In Store

In case you were a little skeptical, the trailer for the film shows just how much adventure will be packed into the movie.

It’s safe to say that finding the tree isn’t exactly a walk in the park. “Everything you see wants to kill you and can,” Johnson’s character says in the trailer.

But the film isn’t just about the search for a healing tree, either. The trailer shows that there might even be some romance in store between Johnson and Blunt’s characters, too. Ooh la la.

It’s Rated PG-13 — But Is It Appropriate For Kids?

It’s important to note that the film is rated PG-13 for sequences of adventure violence. So, if loud noises, fast-paced action, and animals bearing their teeth (as seen in the trailer) are the stuff that will give your kids nightmares, then you might want to sit this one out until they’re a bit older.

Johnson Rode A Mini Boat With His Daughter

Johnson has taken his Jungle Cruise acting off screen to Chuck E. Cheese, where he celebrated his 5-year-old daughter, Jazzy’s, half birthday by riding on a “mini Jungle Cruise” boat.

“Riding the Chuck E. Cheese version of ‘Daddy’s Jungle Cruise’,” Johnson captioned the photo. “We all had an awesome time and as you can see here, my 270 lbs. completely dislodged this poor little boat off its happy hydraulic hinges.”

OK, so this version might not be as thrilling or supportive as the one in the movie, but Jazzy looks like she is having a great time.

The Mary Poppins Returns actress said that her two daughters with husband, John Krasinski — Hazel, 7, and Violet, 5 — are normally not the biggest fans of her movies. But they love watching the Jungle Cruise trailer for so many reasons. “This interestingly has been the only trailer that they have watched multiple times,” Blunt said during an appearance on Live with Kelly and Ryan on Thursday. “They are usually disinterested in seeing me on screen, but they’re really into Jungle Cruise. They love the jaguar, they love DJ, they love the dynamic, they love the whole world.”

Jungle Cruise Is Based On The Ride At Disney World & Disneyland

In fact, you may have ridden on it before. Jungle Cruise is based on the Jungle Cruise ride at Walt Disney World in Orlando, Florida in the Magic Kingdom park and at Disneyland in Anaheim, California. This 10-minute long boat ride leads guests on a tour of some “treacherous waters” as you can observe abandoned camps and animals abound. But this ride is about to get a makeover very soon. Disney will be building on to the story of the ride and giving it a new makeover in the near future.

“The Jungle Cruise ride was Walt Disney’s main attraction when the park opened, and now we have the incredible opportunity to turn it into a movie,” Johnson told Entertainment Tonight.

Catch It In Theaters, Or On Disney+

After being delayed for an entire year due to the coronavirus pandemic, you can finally watch Jungle Cruise at the end of July. Jungle Cruise will premiere in theaters on Friday, July 30. Or, you can order it on Disney+ with Premier Access for $29.99.

In the meantime, you can watch another Disney film based on a ride at Disney World, Pirates of the Caribbean: The Curse of the Black Pearl.

This article was originally published on July 8, 2021