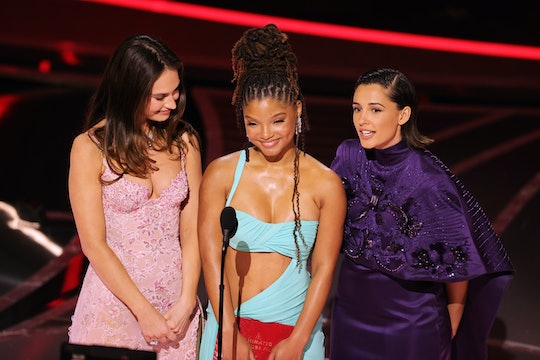 Three IRL Disney Princesses Took The Stage At The 2022 Oscars

And it was just the best.

Talk about movie magic. Prepping to award an Oscar for the Best Animated Feature Film, three IRL Disney Princesses took the stage — Lily James, who played Cinderella in 2015, Naomi Scott, who played Princess Jasmine in 2019’s remake of Aladdin, and Halle Bailey, who is set to play Ariel in the 2023 edition of The Little Mermaid. Honestly, it was a super cute moment, but it’s especially sweet when you think of how diverse these princess looked on stage together.

James, Scott, and Bailey all looked absolutely gorgeous on stage, and Scott very sweetly told Bailey “welcome to the club” as a new IRL Disney princess. And it made perfect sense for the three of them to be up there, especially as they announced that the 2022 Academy Award for Best Animated Feature Film went to Encanto, a Disney film that has blown the world away with its perfect soundtrack and incredibly diverse characters. (I mean, I know it’s early days yet, but doesn’t a live-action Encanto sound perfect? I’m in love already with this idea.)

While James and Scott have been Disney princesses for a few years now, Bailey will be making her debut as Ariel in The Little Mermaid in 2023. It’s, of course, going to be perfect, especially after hearing that Bailey’s favorite song to work on in the movie was “Part of Your World.” So amazing. Now how do I become part of this IRL Disney princess crew?