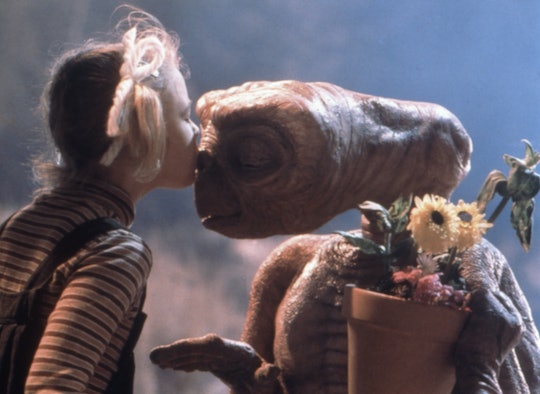 The Touching Story Behind Why Drew Barrymore Believed E.T. Was Real During Filming

“I really, really loved him in such a profound way.”

E.T. was first released 40 years ago when Drew Barrymore was 7 years old. She played Gertie, the little sister of Elliott (Henry Thomas) who discovers the extra terrestrial E.T. in his backyard. Some of the most moving scenes from the movie came from Gertie engaging with E.T. in her delightful, unaffected way, embracing him as though he were real. Because, it turns out, Barrymore actually thought E.T. was a real living creature. And what’s more, director Steven Spielberg went to great lengths to ensure the illusion not be shattered for the little girl.

On a recent episode of her talk show, Barrymore caught up with E.T. co-stars Thomas, Dee Wallace, who played her mom, and Robert McNaughton, who played her oldest brother Michael. The actress explained that to her at the time, the puppet E.T. was completely real. “I really, really loved him,” she explained to her castmates emotionally, “in such a profound way.”

Thomas shared an example of how much she loved E.T., saying that when they were working on stage it had gotten quite cold, “And you asked the wardrobe lady if you could have a scarf for E.T.’s neck. So you wrapped the scarf around his neck.”

Wallace went on to share that Spielberg went to great lengths to keep the illusion alive for Barrymore. “We found you over there just talking away to E.T. and so we let Steven know. And so Steven, from that time on, appointed two guys to keep E.T. alive so that whenever you came over to talk to him, he could react to you.”

The sweet story of a crew working to keep the E.T. magic alive for Barrymore when she was little has gone viral, with people getting emotional about it on social media. “Steven Spielberg appointing 2 guys to ensure E.T. was always operating in case Drew Barrymore went over to talk to him has made my heart so full. What a mensch,” wrote one user, while another noted that this was particularly moving given Barrymore’s life at the time, “The story of Steven Spielberg hiring 2 ppl to puppeteer ET around the clock so Drew Barrymore would keep believing he’s real & her friend has had me emotional for a week now. Like. She had no adults in her life that cared about her except her coworkers. That is insane.”

Time to rewatch E.T. with the realization that Drew Barrymore fully believed the puppet was real at the time. And that she loved him profoundly.

More Like This
How To Watch Elf In 2022, Including A 24-Hour Marathon
All The Nights The Grinch Airs On TV In 2022
Brandy Will Play Cinderella Again In The Disney+ Movie The Pocketwatch
David Beckham Impressed Mariah Carey With His Rendition Of "All I Want For Christmas"