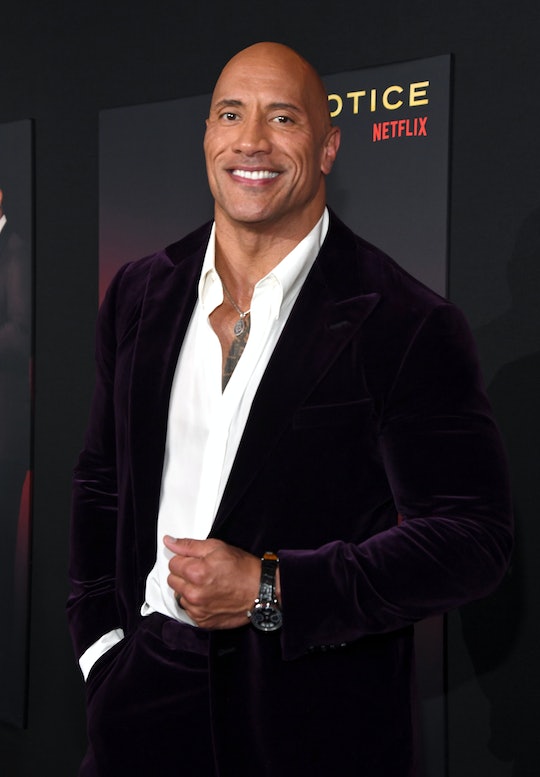 “They’re only little ones once, so I’ll play this game til the wheels fall off.”

It is a truth universally acknowledged that the combination of muscle-bound tough guys and dainty little girls is one of nature’s most adorable pairings. Like in Looney Tunes, where that bulldog becomes super attached to that little kitten? It’s the best. Recently, Dwayne Johnson scratched that itch for us. In a video shared on Instagram, Johnson’s daughters pranked their dad like pros by playing a rousing game of “Daddy, close your eyes and put your face down... ”

In the clip, Johnson towers above his two youngest daughters, Jasmine and Tiana with his eyes closed. Jasmine holds a paper towel loaded with (we know from the caption) shaving cream and toothpaste, giggling along with his sister. “Put your face down,” she coaxes.

“What do you mean put my face down,” he laughs, knowingly nervous, before immediately covering his crotch and changes to a more serious tone. “Don’t hit me there!” (Because even The Rock’s rocks are apparently not safe from careless kicking, hitting, and bumping from kids – the tragedy of dads everywhere.)

After being reassured (despite giggling from both girls), Johnson does as asked. “Wait a second, I smell something... ” he says.

“Close your nose!” Jasmine insists, before slamming the shaving cream in her dads face.

The ensuing eruption of giggles is absolutely adorable.

“At least I’ve learned to protect my jewels,” he wrote in the caption, adding that the potent combination of toiletries stings the eyes. Still, he’s pleased to let his “tornados” have fun at his expense. “They’re only little ones once so I’ll play this game til the wheels fall off,” he explains.

Fortunately for all of us who enjoy seeing a handsome, charming man with enormous muscles in the thrall of mischievous little girls, this is hardly the first time Johnson’s shared playtime with his daughters on social media. “The Rock” has been known to play with Barbies, give mini-manicures, and even chase after “Spaghetti Fairies.” In fact, this isn’t even the first time Jasmine has enjoyed a rousing game of “Daddy close your eyes and put your face down.” The 6 year old previously giggled while shoving peanut butter in her unsuspecting father’s face.

Again, Johnson takes it in good humor and perspective. “One day they’ll be grown & gone, and smashing the sh*t outta daddy’s face with peanut butter is the last thing they’ll want to do,” he wrote. “So while they still love hanging out with daddy ~ bring on the peanut butter!”

More Like This
Elon Musk's Child Files To Change Name, No Longer Wants To Be "Related" To Father
Chris Pratt Says He "Cried" About That "Healthy Daughter" Instagram Post Controversy
Ben Affleck’s 10-Year-Old Son Samuel Test Drove A Lamborghini Right Into A BMW
Prince William Shares How He Plans To Follow In His Mother's Footsteps With His Kids