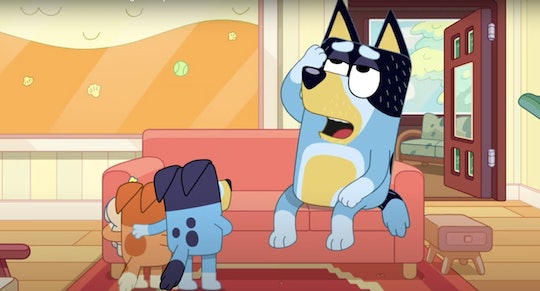 Exclusive: Watch Bluey’s Bandit Break Down How To Not Swear In Front Of The Kids

Father’s Day is coming up and, surely, no father in recent years has captured our collective heart more than Bluey’s Bandit. Hilarious, playful, caring, and Australian (who doesn’t love that accent?), Bandit really captures the essence of fatherhood. To honor just how much this Blue Heeler is absolutely crushing this whole dad thing, Romper has an exclusive Bluey clip featuring Bandit breaking down how he keeps it TV-Y around the kiddos, even when it looks like he really wants to drop an F-bomb.

OK, maybe it sounds weird to talk about a character from a children’s show with this kind of enthusiasm and reverence. But even a single viewing of Bluey makes it clear why it is so popular among children and parents alike — it’s charming, sweet, funny, and real. (Yes: a show about talking dogs is real.)

“Mum and Dad” (aka Chilli and Bandit) are silly and playful with their pups Bluey and Bingo — they’re all about a good game of make-believe or playing “Keepy-Uppy” with a balloon. Their interactions with their children, and each other, read very true to parents raising human children in the not-cartoon world. Largely because the realism doesn’t stop with the joy and whimsy of raising kids; it can show the frustrations, screw-ups, and inconveniences of parenting as well.

“As a parent, having small kids bust in on you when you're on the toilet is a surprise at first, but it quickly becomes a fact of life,” Bluey producers Charlie Aspinwall and Daley Pearson told Romper in 2019. “If these kind of moments make it into the show, it's because Bluey is observational and authored, and they are the kind of moments that make us laugh and that kids and grown-ups will recognize.”

In this exclusive Bluey clip, Bandit demonstrates how to keep it kid-friendly even in the face of some more adult frustrations, from mysteriously clogged toilets to that scourge of so many fathers: routine kicks in the crotch. (Why is it always the crotch...?)

One of Bandit’s tips? Shout your favorite snack instead. Try screaming “cheese and crackers!” or “beans on toast!” Or just yell out “biscuits!” the next time your kid accidentally smacks you in the groin.

Like Bandit, we also appreciate a good made-up curse word. May you take this wisdom with you into your next curse-worthy parenting moment!

Bluey airs daily on Disney Junior, and is available to stream on Disney+.