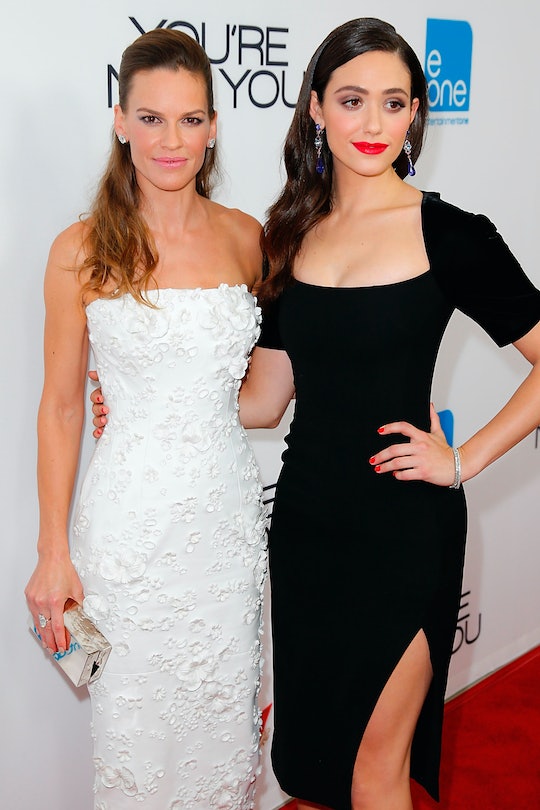 And it only took three choice letters.

Don’t come for any of Emmy Rossum’s people, or you might get shut down by the outspoken actress and mom herself. When Hilary Swank, Rossum’s costar in the upcoming movie You’re Not You, recently announced that she was pregnant with twins at 48, most people were rightfully overjoyed for the beaming mom-to-be. Sadly, some trolls also popped out of their dark and pathetic internet caves to make rude comments about the Oscar winner’s age. Enter Rossum, who swooped in like an Instagram superhero to put the haters in their place. With three little letters, she stood up for Swank like the kind of loyal friend everyone needs.

The fiery squabble took place on Instagram where Swank announced her joyous announcement that she is expecting twins with her husband Philip Schneider. The Million Dollar Baby star posted a sweet picture of her bump along with a cute caption about her “double feature.” Swank was mostly showered with well wishes from the likes of author and Stories of the Soul podcaster Najwa Zebian, who wrote: “What a beautiful gift ❤️ THAT’S SO EXCITING!!!!!! Congratulations ❤️.”

Then, a troll (with zero followers, mind you) chimed in with a nasty reply: “AREN’T YOU LIKE 50 YRS OLD? Gonna be in your 70’s when they graduate college. MIGHT live to see their wedding, maybe.”

Well that set off Rossum, who gave the troll a piece of her mind with her own comment: “Gfy.” (the to-the-point acronym that stands for: “go f*ck yourself”).

Rossum’s reply racked up hundreds of likes. It elicited other supportive comments from fans who noted that her feistiness was similar to the tough-talking character Fiona that she played on the Showtime hit Shameless.

Rossum has a solid reputation for speaking her mind. The The Angelyne star was very vocal on her beliefs that little ones should get vaccinated, is a fierce supporter of single moms, and demanded equal pay with her male co-stars on the set of Shameless.

Even though Swank is famous for playing a boxer on film, it looks like Rossum might be the one you want in your corner when the time comes to knock out a troll.