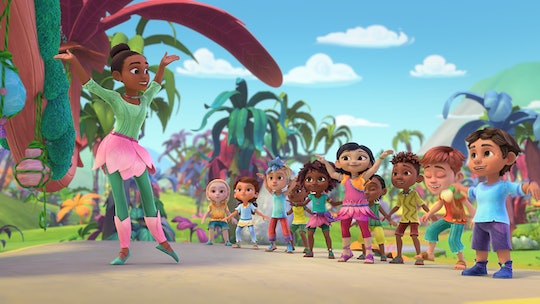 Misty Copeland twirls in animation in a new episode of Eureka! premiering Friday, Aug. 26, on Disney Junior. The ballerina joins The Rocky Falls kids to teach them how to dance in this super cute preschool show, and Romper has an exclusive sneak peek at the episode, below.

Copeland teaches Eureka (voiced by Ruth Righi of Disney’s Sydney to the Max), and her schoolmates a dance for school in “Dance Dance Evolution/Barry On,” premiering at 7:30 p.m. EST.

“The Rocky Falls kids learn a new dance for school and everyone is able to master the routine except for Pepper,” the episode’s official logline reads. “Eureka invents a machine to help Pepper learn the official dance’s footwork, but ends up using the invention to teach the class Pepper’s dance instead.”

The clip shows the outside dance class, with Copeland dressed in green tights, a green shirt, and green ballet shoes, with a pink tutu and pink leg warmers. She looks like a fairy as she stretches and dances for the kids.

“Friends, a few years ago, I was just like you,” Copeland says in the clip, adding, “Once I learned how to dance, I could do it all.”

She then shows them how to do the “Graceful Bird” dance, which they try by flapping their wings. It is so cute!

As the first Black principal dancer for the American Ballet Theatre (ABT), Copeland is full of grace and strength while doing ballet. But she’s also super great with kids! Copeland released a kids’ book, Bunheads, in 2020, telling Romper at the time, “I was once terrified to do anything that made me uncomfortable. The thought of doing ballet was so scary. But once I tried it, it changed my life. I think challenging yourself makes you so much stronger!”

She has also has her own Barbie doll and has served as the ambassador for the Youth of the Year program at the Boys & Girls Club, telling Romper in 2020, “It just gives me so much hope for the future.”

Eureka! is a music-filled STEAM series for preschoolers, starring a little girl who uses creative, out-of-the-box “tinkering” (a combination of thinking and tinkering) to create new inventions that help make the world and her community of Rocky Falls a better, more modern place. Renée Elise Goldsberry (Hamilton) and Lil Rel Howery (Free Guy) voice her parents, and her teacher is voiced by Javier Muñoz (Hamilton).

The show is produced by Brown Bag Films, the Academy Award-nominated animation studio behind Disney’s Doc McStuffins, which helped pave the way for diverse, on-screen female role models in preschool entertainment. Other Disney Junior series with diverse female stars include Mira, Royal Detective and Elena of Avalor. For its part, Eureka! aims “to foster creativity, innovation, curiosity, and acceptance among young audiences.”

Watch the exclusive clip below.

Stream the full episode when it premieres on Disney Junior on Friday, Aug. 26 and on Disney+ this fall.