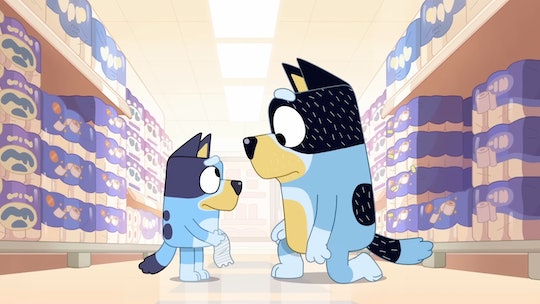 From toilet paper aisle conversations to the sprinkler dance, Bandit is the ultimate #DadGoals.

Bandit (aka, Dad) from Bluey is #DadGoals. The blue heeler patriarch makes time for his daughters, Bluey and Bingo, shares parenting duties with his wife Chilli (aka, Mum), and makes dads and moms everywhere laugh with his hilarious and relatable quips. (Who else finds it painfully awkward to befriend your kid’s friend’s parents? Exactly.) He stands out from other dads on TV with his devotion, patience, and thoughtful interaction with his kids — and this Father’s Day, he deserves to be celebrated!

For those who need a refresher, Bandit is an Australian archaeologist who gets distracted easily when his daughters burst into his at-home office with silly games and plans for the day (as kids do). “As the devoted, yet tired father, he does his best to use whatever energy is left after interrupted sleep, work and household chores, to invent and play games with his two girls,” his official character bio states. “He still tries to continue his own life amidst the chaos of childrearing but often struggles to juggle these two competing tasks!”

When he isn’t making up the most delightful games, like Statue, Hotel, or The Claw, he’s offering insightful advice, or apologizing to Bluey and Bandit when he makes a mistake. Now, his best moments are captured in a 12-minute montage — which will make you feel things — and Romper has the exclusive clip here.

This “Bandit’s Best Bits” Father’s Day clip features moments from several different episodes, where Bandit pretends to be Daddy Robot, has a heartfelt conversation in a toilet paper aisle, and gets pampered in a day spa in the woods. It captures his personality perfectly!

For more Father’s Day fun, you can set up Bluey-inspired activities with your kids and their dad. Start by making a card for “A True Blue Dad.” With blue paper, scissors, quick-drying glue, and this printable template, your kids can easily assemble a Father’s Day card. Or, little ones can color this Bandit coloring page instead. Print out the picture of Bandit striking a pose to let kids color for their dad.

When you get hungry, make a Duck Cake! The recipe, created by The Australian Women’s Weekly Children’s Birthday Cake Book, requires butter cake mix, frosting, licorice, popcorn, potato chips, and more. After baking the cake, it takes a handy adult to cut and shape the pieces, assembling it into a rubber duck. Kids will love adding the popcorn hair and candy face for the final look.

Of course, the best Father’s Day gift is encouraging your kids to spend time with their dad. Just turn on a Bluey marathon from Disney+ and be sure turn up the volume if (er, when) his snores inevitably drown out the show. For today, it’s OK to pretend he is just “resting his eyes” and didn’t accidentally fall asleep. It’s what Bandit would do!

More Like This
'Caillou' Is Officially Getting A CGI Reboot Whether People Like It Or Not
Elmo Talks About Getting His Covid Vaccine In A Cute New Video
Lyle, Lyle, Crocodile Is Heading To The Big Screen As A Musical Comedy
Viral TikTok Breaks Down How Beautifully Bluey Depicts One Character’s Infertility