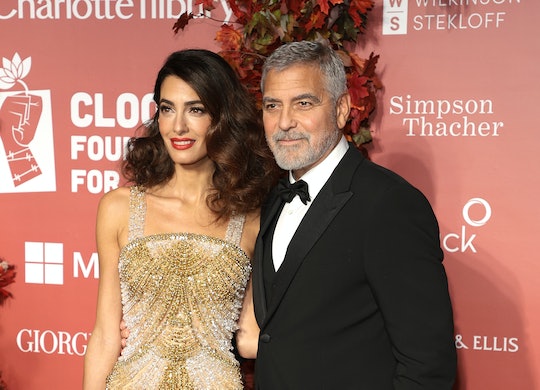 “We’ve made a terrible mistake.”

George and Amal Clooney have been raising their 5-year-old twins in several places around the world, including the couple’s home in Lake Como, Italy. And now young Alexander and Ella are using their rather cosmopolitan upbringing against their parents, according to Clooney. The actor told Gayle King in an interview on Wednesday that he and wife Amal had made “a terrible mistake” with their children, “We taught them Italian.”

The couple sat down for a rare interview together with King on CBS Morning, giving some insight into their life at home as parents of 5-year-old twins on their eighth wedding anniversary. And it seems the family is in an unusual position when it comes to conversation. Namely, the 5-year-old twins can speak a language their parents don’t understand.

“We don't speak Italian,” Clooney explained, “so we've armed them with a language they can harm us with. And we both don't really know what they're saying.”

This isn’t the first time Clooney has felt left out of his twins’ little language exchange. “We did a really dumb thing, which is, they speak fluent Italian. I mean fluent Italian at 3. But I don't speak Italian, my wife doesn't speak Italian, so we've armed them with a language,” the dad of two told Jimmy Kimmel in 2020, going on to share an example, “I'll say, 'Go back in and clean your room,' and they'll be like, 'Eh, papa stronzo.’”

One thing young Alexander does have in common with his father, according to Amal Clooney, is that he is a “bit of a prankster.” Taught by master prankster George Clooney himself. It’s a craft Clooney has been working on with both his children for several years; back in 2021, he taught them to put Nutella in a diaper and then wait until poor Amal Clooney is in the room before eating it. It was a trick Alexander apparently really enjoyed.

While he might have enjoyed learning pranks from Clooney, Alexander is not especially impressed by his world famous father, even though he once played Alexander’s favorite superhero, Batman, in movies. “I go, 'you know, I was Batman,' and he goes, 'yeah, but not anymore,’” Clooney explained, “if only he knew how true that was.”

More Like This
How Old Should Kids Be Before They Watch The 'Christmas Story' Sequel?
Rubble From 'PAW Patrol' Is Getting His Own Spinoff Series Full Of "Messy Demolition"
David Beckham Impressed Mariah Carey With His Rendition Of "All I Want For Christmas"
Julia Louis-Dreyfus Holds Hands With Son Charlie Hall At White House State Dinner