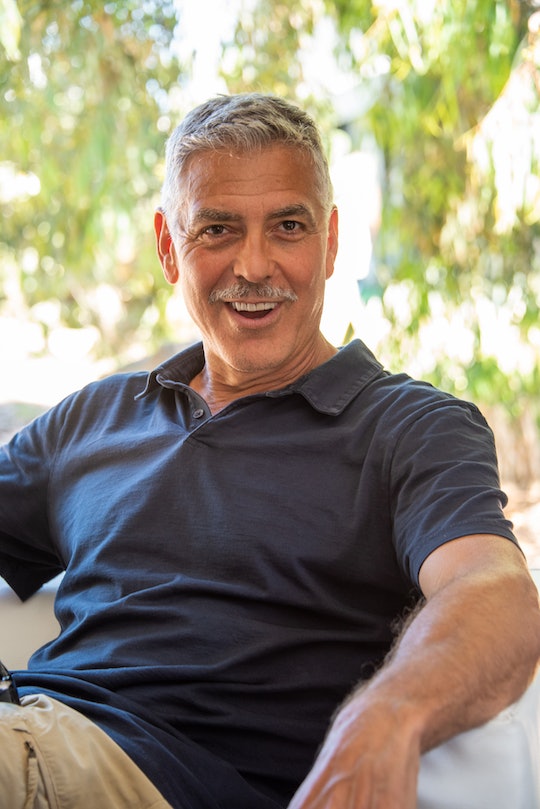 "These kids are all slobs."

Here is the truth about toddlers: Even the really nice ones don't tend to be that much help with household chores. And this sad truth is hitting one celeb dad hard during the pandemic. In a recent interview with W for the magazine's "Best Performances" issue, George Clooney called his 3-year-old twins "slobs" and complained about endless rounds of chores. Bad news for the Midnight Sky actor — it doesn't get better for a long, long time.

Clooney welcomed twins Alexander and Ella with his human rights lawyer wife Amal in 2017, and the family has apparently been spending a whole lot of time together during quarantine. Much like the rest of us. And it seems he's developed a new hobby during the pandemic with his kids: laundry. "I'll tell you what I've taken on as a hobby: two or three loads of laundry a day, dishes all f*****g day, because these kids are all slobs. Apparently, you have to wash your children every once in a while," he told W.

That's not his only hobby, he's also become a hairstylist to his son. But not his daughter. Apparently on strict instructions from his wife. "I cut [my son’s] hair, and I cut my own hair too, but I’ve always cut my own hair. My hair is like straw," he told W. "I haven’t cut my daughter’s hair. I’d get in trouble if I did. If I screw up my son’s hair, he’ll grow out of it. But my wife would kill me if I touched my daughter’s hair."

Clooney's twins have become little stars themselves despite the fact that neither of their parents are active on social media or share photos of them. His son Alexander interrupted an interview with GQ back in November and got included in the article written about his dad. Impressive, some people wait their whole lives for that sweet GQ spot.

While his twins might not be helping out around the house a whole lot, they actually have some pretty impressive skills that surpass even their famously talented dad. They speak Italian. Clooney told Jimmy Kimmel that his kids are able to use their bilingualism as a "secret language" against him back in December, which makes sense since the family has spent a considerable amount of time at Clooney's estate in Lake Como.

Maybe they can channel some of their considerable brain power into tidying up. Just kidding, I've had toddlers. That's not how they roll.