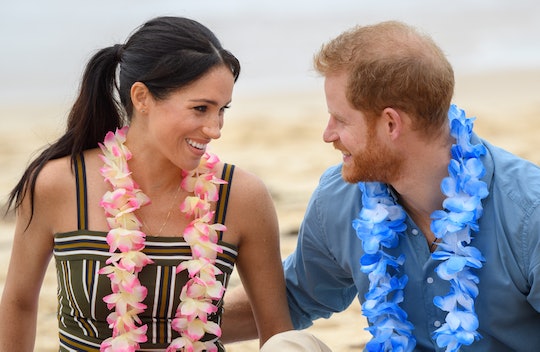 She didn’t learn calligraphy for nothing.

It’s been three years since Meghan Markle and Prince Harry tied the knot at St. George’s Chapel at Windsor Castle. Three years and so much has changed. They are now parents to 2-year-old Archie Harrison. They are expecting their first little girl this summer. And oh yes, they stepped away from their royal roles and are now living as private citizens in Montecito, California. But one thing has not changed over the past three years — these two really dig each other. And the Sussexes have been known to give sweet, romantic, thoughtful gifts as gestures of their enduring love over the past few years.

Meghan and Harry will presumably be enjoying a bit of a low-key third anniversary this year on May 19, as that appears to have become their favorite way to celebrate big milestones. Well, that and making charitable donations. Take their son Archie’s second birthday, for instance. The couple celebrated by amplifying the need to get the COVID-19 vaccine to countries around the world as well as donating wool beanies to a charity in New Zealand focused on helping women and children who had suffered domestic violence.

But what about the gifts they give each other? From birthdays to anniversaries to Father’s Day, the Duke and Duchess of Sussex always manage to give each other meaningful gifts.

Meghan’s first anniversary gift to Harry drew on some of her pre-royal skills; she reportedly wrote out her wedding speech to him from their May 2018 nuptials in calligraphy and had it framed for him, according to The Sun. First anniversary is paper, after all, and Meghan once wrote on her now-defunct lifestyle website The Tig that she valued a handwritten note as a thoughtful gift.

Meghan Markle received an eternity ring for her first anniversary.

For his part, Harry gifted Meghan with an eternity ring for their first anniversary. According to Harper’s Bazaar, he reportedly worked with jewelry designer Lorraine Schwartz to ensure she had something thoughtful and unique. Meghan had just given birth to their son Archie weeks earlier, and was spotted wearing the special new ring at the Trooping The Colour in 2019.

For Harry’s birthday in 2019, Meghan reportedly recreated their romantic African camping adventure from their early dating days. The two famously took off to Botswana before getting engaged in 2017, and Meghan “wanted to bring that happy place to him on his day so she set up a tent, got sleeping bags, cooked dinner and recreated Botswana where they fell in love,” a source told People, recreating the scene in their own backyard at Frogmore Cottage in England at the time. Pretty romantic.

Birthday Necklace (And Dinner For Two)

Prince Harry really covered all of his bases when it came to celebrating his wife’s 39th birthday. A source told The Mirror that the loving husband made sure they were able to enjoy a romantic dinner alone (cooked by him) while Markle’s mom Doria Ragland babysat Archie, then gifted her with a necklace he designed and a framed picture of their little family that he had taken himself. That’s a tough act to follow.

A Book For Father’s Day

Meghan wrote a children’s book called The Bench, which is available for everyone to read but initially spawned as a Father’s Day poem for Prince Harry, all about the love between a father and son as seen through the eyes of the mother.

Whether it’s jewelry or a card or a donation to an organization, thoughtfulness is the first priority for the Duke and Duchess of Sussex and their gifts to each other. They really are a great match.