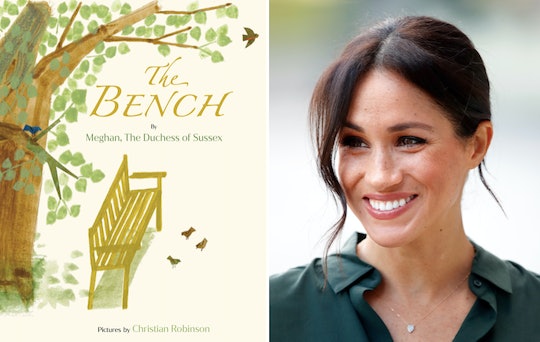 Based on a poem about Prince Harry and Archie.

Actress. Philanthropist. Duchess. Feminist. Mother. And now, Meghan Markle is the author of a children’s book. On Tuesday, Random House Children’s Books announced the upcoming release of Markle’s debut children’s book The Bench, set to hit shelves in Canada and the U.S. on June 8.

The Bench, which tells the story of a sweet and special bond between a little boy and his father as seen through the eyes of his mother, was inspired by Prince Harry’s relationship with the couple’s son Archie, according to the publisher. Illustrated by award-winning artist Christian Robinson and author of the book You Matter, The Bench actually started off as a personal poem for Prince Harry.

“The Bench started as a poem I wrote for my husband on Father’s Day, the month after Archie was born,” Markle said in a press release. “That poem became this story. Christian layered in beautiful and ethereal watercolor illustrations that capture the warmth, joy, and comfort of the relationship between fathers and sons from all walks of life; this representation was particularly important to me, and Christian and I worked closely to depict this special bond through an inclusive lens. My hope is that The Bench resonates with every family, no matter the makeup, as much as it does with mine.”

Markle will narrate the audio version of the beautifully illustrated children’s book, which Random House for Young Readers publisher Mallory Loehr has described as “timeless — it feels destined to become one of those books that people will be reading for generations to come.”

In one of the preview pages from The Bench, a father with red hair dressed in a military uniform picks up his son as a mother watches from the window. “Looking out at My Love and our beautiful boy,” the text reads. “And here in the window I’ll have tears of joy.” Another page sees another father resting on a bench with his son on his chest and the words, “From here you will rest. See the growth of our boy.”

The theme of the bench could be based on the royal couple’s own backyard at their home in Montecito, California. When they were filmed as part of a TIME 100 special last September, Markle and Prince Harry sat side-by-side on a bench in their yard. A bench that looked very similar to the one in Markle’s new book.

A children’s book feels like a perfect fit for Markle right now as she prepares to welcome her second child, a baby girl, this summer and her son Archie turns 2 years old.