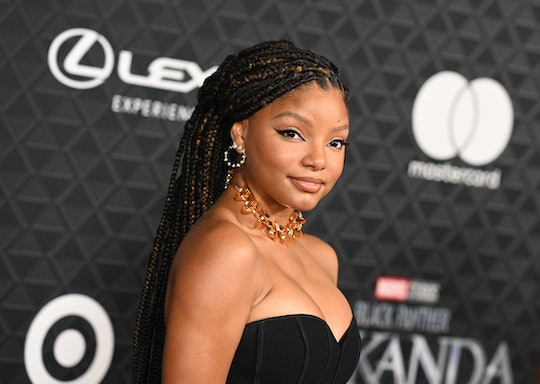 “Thank you for being an inspiration to little brown girls all over the world...”

The magic of Halle Bailey continues to expand beyond the sea. The Little Mermaid star’s impact has even touched airlines’ finest. While on a recent Delta flight, Bailey received a lovely note from a pilot and shared a photo of it with her fans on Twitter.

“Miss Bailey, it is an honor to have you on board today,” the letter read. “Thank you for being an inspiration to little brown girls all over the world, like we were a few years ago.” The pilot ended the note by signing, “Jess O, your young Latina female Delta Pilot.”

Bailey shared a photo of letter on Twitter, with the caption: “this amazing pilot on the plane gave me this beautiful note today.”

“You’re giving so many little girls wings,” Delta Airlines replied under Bailey’s tweet. “Thank you for letting us be part of your world,” a reference to the Disney movie’s song first performed by the original Ariel, Jodi Benson.

The trailer for Disney's live-action remake of the movie premiered in September. Since then, it's been sending an emotional, empowering frenzy among young girls of color. Videos of the reactions of little Black and Brown girls seeing Bailey for the first time as Ariel went viral on social media.

“She’s Black! She looks so pretty,” one little girl said in a video shared by her mother on TikTok.

Serial entrepreneur and mom of two Marlo Richardson described the moment when her daughters saw Bailey as priceless. “The reaction to my little girls seeing Halle as the Little Mermaid was not only priceless to me as a mother but nostalgic and fulfilling as a Black woman,” she tells Romper. “Growing up, seeing Black representation on TV was not really seen in mainstream television and film for me, so needless to say when women like Brandy (who played Cinderella) and Anika Noni Rose (who played Princess Tiana), the little girl inside me screamed.”

“It's so important and empowering to see these classic characters remade into images our children can relate to and better appreciate,” Richardson added. “A little Black girl may not have known she could be part of Ariel's world if she did not seen Halle do it first.”

Ariel seemed to have been a popular Halloween costume for little girls as well. On Oct. 29, Bailey tweeted, “seeing so many people being ariel for halloween makes me cry.” Indeed, from trick-or-treaters on the street to pilots in the sky, Bailey continues to inspire.

Disney’s live-action Little Mermaid premieres in theaters on May 26, 2023.