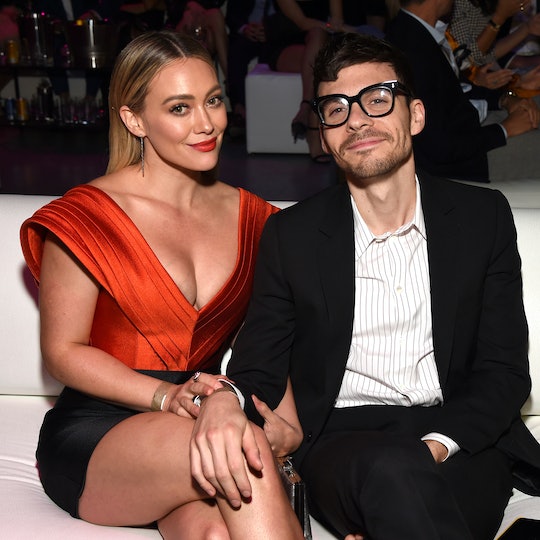 “We LOVE you beauty.”

To announce the news that her third child has arrived, Hilary Duff shared an intimate photo from her home water birth over the weekend. The black and white birth announcement photo featured the entire family as the Younger star held her newborn daughter, Mae James Bair, in her arms.

The new mom welcomed her third child late last week at home and surrounded by her husband, musician Matthew Koma (whose real name is Matthew Bair), and their two kids: 2-year-old daughter Banks and 9-year-old son Luca, whom the actress shares with ex-husband Mike Comrie.

“Mae James Bair — we LOVE you beauty,” Duff captioned the stunning shot of her holding Mae from the birthing tub while the rest of the family members look on. Everyone in the photo looks so happy, including big sister Banks, who Duff said was “marinating” on how she feels about the title.

This is not the first time the My Brave Little Girl author has delivered at home. After giving birth to her son Luca in a hospital, Duff gave birth to Banks at home in a tub, for a “different experience,” as she shared during a November 2018 episode of Dr. Elliot Berlin’s Informed Pregnancy podcast. Although she experienced some pain, Duff told Berlin that she “would totally do it again,” which she did with her third child. Duff even thanked her “birthing dream team” on her Instagram Story over the weekend.

Duff had been anticipating the birth of baby number three since she made her big announcement in October. While she was keeping the baby’s sex a surprise, during a March episode of the Informed Pregnancy podcast, the mom-to-be said that she was a little “scared” to have another girl. “I’m actually a little scared to have another girl because Banks was a tough — she was a tough cookie as a baby, but she’s so great now, so I could see it,” she said. “But then I don’t know, in my mind I’m like ‘Maybe she’s my only little princess and she’s going to have her rough and tumble brothers... Either way, we’re stoked and super excited.”

It certainly seems like everyone in Duff and Koma’s family is stoked now that little Mae has arrived.