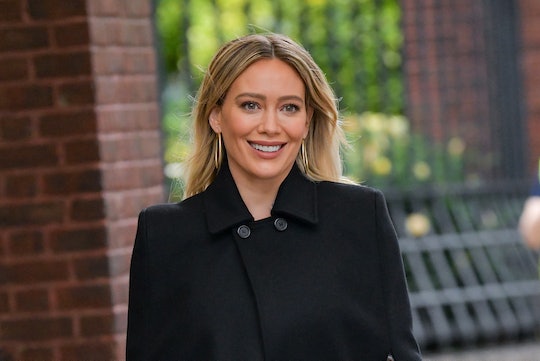 Imagine if she was right?

During a recent podcast interview, mom of two Hilary Duff shared what she thought about sex when she was younger. Specifically, what she thought would happened after having sex for the first time and it turns out she was a bit misinformed. And all I can say is, I'm quite relieved she turned out to be wrong.

The Younger star was recently a guest on Ellen DeGeneres' original program Lady Parts, where she, Ashley Benson, and Sarah Hyland all sat down with OB-GYN Dr. Sherry Ross to talk about their first periods, puberty, and sex education. Or, as was the case for Duff, rather a lack thereof for some of the women. Pretty Little Liars' Benson admitted that her sex education at a Christian school was being shown a film in class "and that was kind of it."

As for Duff, who is currently pregnant with her third child, she was very unclear on a few things when it came to sex. Especially the first time. As she told the other women, "Oh my god. Well, I thought the first time you have sex you're going to get pregnant."

If that's not enough to scare a young person off their first time having sex, I don't know what is. For the record, a woman can get pregnant any time they have unprotected sex, first time included, but it is not a guaranteed outcome.

Naturally, Duff is now a grown woman with more information. Mom to 8-year-old son Luca with ex-husband Mike Comrie and 2-year-old daughter Banks with husband Matthew Korma, she now has some advice for what she wished younger people understood about sex. She wants young women to understand it's OK for sex to be for pleasure. "People don't really talk about when you're younger is that sex is for pleasure, too — not just about being in love. Like, you're having a lot of different feelings in your body and a lot of people are, like, ready at different times. I guess I never got taught that it was about, like, feeling good and connecting with someone. And you know, I think as a young girl you get taught, 'Well, you want the guy to feel good' or something, and that's really a terrible mentality to go into, like, starting to have sex with."

As a mom, Duff can help to educate her own children on having a healthy attitude about sex. And maybe even let them off the hook by telling them the first time doesn't always lead to pregnancy. Especially if they're practicing safe sex.