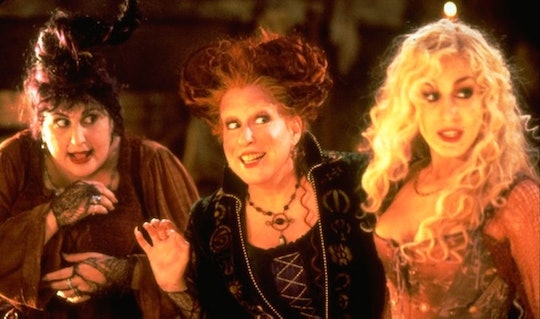 The One Detail You Never Noticed In Hocus Pocus

You can watch classic Halloween movies like Hocus Pocus more than 100 times and still find new things that are funnier now that you’re older and wiser. Or, you can find new details that make you do a double take and question everything you thought you knew about the film to be true. This is why I feel the need to point out the one detail you never noticed in Hocus Pocus that will definitely make your feelings run amuck, amuck, amuck.

At the end of the movie, when the Sanderson sisters basically explode into a glittery ball of dust when the sun comes up after failing to suck the life out of any of the town’s children, the magic behind Billy’s undead state doesn’t exactly work the same way as the other magic spells the witches performed during their big night out on the town.

Billy Is Still Under The Witches’ Spell In The End

As diehard fans know — spoiler alert! — once the Sanderson sisters are dead, any magic they cast while alive effectively undoes itself. This is why Binx finally dies for good and became the ghost version of his human self. This is also why the parents are finally able to stop dancing at the town hall. The witches' demise broke the spell Winnie had put on them. And yet, Billy did not immediately revert to being a regular (not-walking, not-talking) corpse. In fact, he also gets his own little ending scene in Hocus Pocus when he carefully climbs back into his grave and falls back asleep, aka dies again. But it felt more like it was his decision rather than the result of the Sanderson sisters dying. Why is that?

You never really question it the first time around, or you know, the billionth time you watch Hocus Pocus, but it’s one of those things that makes you wonder why the Sanderson sister deaths didn’t immediately reverse the magic they cast on him, as it did for the parents in the town hall, all of the children, and Binx. But maybe it’s because Billy, played by actor, Doug Jones, became such a loved character by the end of the movie that the director figured he deserved more of a send-off than falling to the ground where he stood. Which, you know, fair.

Billy’s Backstory Is Not Fully Explained Either

The story behind Billy Butcherson, though, makes you kind of wish there was a Hocus Pocus prequel to dig up all the juicy details of his relationship with Winifred and subsequent affair her had with her sister, Sarah Sanderson. According to the movie, after Winifred found out about the affair, she poisoned Billy and sewed his mouth shut with a dull needle, hence that thick thread on his mouth when she wakes him up from his eternal slumber. It supposedly was meant to prevent him from telling his secrets, even in death.

But Billy’s lines, as few of them as there are, make his character kind of lovable, even if he’s under Winifred’s control for the most part as he tries to capture Max, Dani, Allison, and Binx. But when you think about it, it seems like his goal was always to align himself with the kids rather than the Sanderson sisters anyway. After cutting his mouth open, Billy calls Winifred a "Wench" and " Trollop," among other colorful names. So maybe their magic wasn’t as strong as Winifred had initially thought? That could potentially explain why he was exempt from the side effects of their deaths.

Billy Has Since Become A Fan Favorite Character

Like Binx, who is arguably one of the best characters from Hocus Pocus, Billy has become a favorite character among fans, even if he was more of a grunter than someone who experienced a lot of emotional growth throughout the movie. But people still love him to this day, going as far as to get tattoos of the Hocus Pocus character, so he was definitely more important as the seven-year-old version of me probably thought he was when I watched this the first time around. “It’s quite special to me to think that a 300-year-old dead guy could spark a crush,” Jones told The Hollywood Reporter in 2020.

Billy wasn’t subjected to a quick return to death once the Sanderson sisters died, since dropping dead would've been a rather grim goodbye (poor Dani was already going through enough). Perhaps Billy will make an appearance in the new Hocus Pocus sequel. But if you want to watch Hocus Pocus for the billionth time and catch this detail about Billy, you can watch Hocus Pocus on Disney+.

More Like This
Here's Where The 'Hocus Pocus' Characters Are 30 Years Later
The Hocus Pocus 2 Soundtrack Is A Spooky Mix Of Old & New
All The Nights Hocus Pocus Airs On TV In October 2022
Witchy Vibes, Salty Language, & More: What Parents Need To Know About Hocus Pocus 2

This article was originally published on Oct. 5, 2017