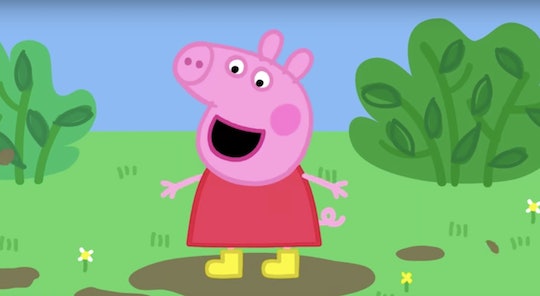 Every toddler's favorite cartoon piggy, who's kinda sassy and kinda bossy, has technically been airing on TV more than a decade now, but there are still so many mysteries parents, and perhaps their kiddos, want to know about the one and only Peppa Pig. For example, given that she's been on TV since the show first premiered in 2004, how old is Peppa Pig exactly? Does she age with the show or is she, as Rod Stewart would say, forever young?

As it turns out, Peppa Pig — who lives with her parents, Mummy Pig and Daddy Pig, as well as her little brother George Pig in a cute yellow house on top of a hill, presumably somewhere in England — is 4 years old, according to Peppa Pig's official website, and she's been that age since the show's inception years ago. So it seems that Peppa, voiced by the talented 17-year-old Harley Bird, will always be a cheeky and sweet little piggy who "loves jumping up and down in muddy puddles, laughing and making loud snorting noises," as her very official bio describes her.

Peppa Pig is a couple years older than her little bro, 18-month-old George Pig, who often gets bossed around by his big sis on the beloved cartoon series. As for when Peppa Pig's birthday is, her official bio doesn't explicitly state the day she was born, but Peppa Pig Fanon Wiki states it's May 30. However, an exact year is not known, given that Peppa is, well, an eternal little piglet.

Though she may not age every single year, forever 4-year-old Peppa definitely seems to love and care about her birthday. For example, in one episode of Peppa Pig — entitled "My Birthday Party" that first aired in 2004 — Peppa wakes up bright and early on her special day, as excited piggies tend to do.

"It's my birthday!" Peppa declares from her bunk bed with a snort, then waking up Mummy Pig, Daddy Pig, and George. Later on, the sweet pig family throws Peppa an epic birthday party every kiddo would enjoy, complete with a magician and her friends like Suzy Sheep, Freddie Fox, Rebecca Rabbit, and Pedro Pony. And, of course, there was a delicious birthday cake with, you guessed it, four candles for her to blow out and make a wish.

Although Peppa Pig first aired in 2004, the TV series, produced by Entertainment One, is currently in its sixth season, as it previously took a two-year hiatus, according to The Independent, and seasons can last for more than a year. And while her age is rarely, if ever, discussed on the show, it remains to be seen whether Peppa's fan will get some new insight about her birthday or how she feels about that 4-year-old life when the show's characters hit to road for Peppa Pig Live!, a new live with life-sized puppets. The tour will stop in locations all across the United States this fall, starting in early September, so if your kiddo has any lingering questions about Peppa's age, who knows, they can maybe ask her then.

More Like This
Here’s How To Watch 'A Charlie Brown Christmas' This Holiday Season
'Wednesday' Creators Say They're "Talking Amongst Ourselves About Season 2
'Workin' Moms' Has An Official Release Date For Its Final Season
Quinta Brunson Credits Her Parents For Her Confidence, Now & As A Kid