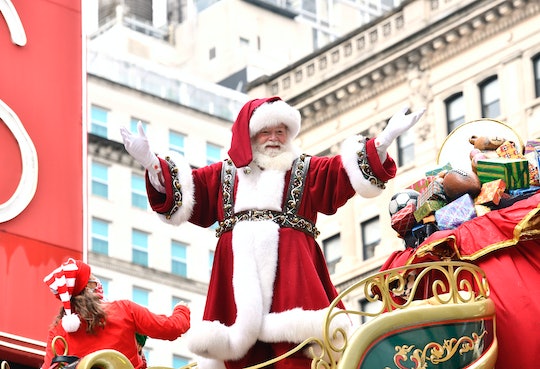 This year marks 95 years of the iconic parade!

The Macy's Thanksgiving Day Parade in New York City is returning this year with new floats and balloons including one Star Wars fans can appreciate and a Nutcracker villain! While crowds weren’t allowed to gather in-person for the parade last year, spectators will be able to line the 2.5 mile route and enjoy the festivities in 2021, so here’s everything you need to know.

“For our 95th celebration, Macy’s has created a spectacle to remember featuring a dazzling array of high-flying balloons, animated floats, and incredible performers,” Will Coss, executive producer of the parade, told the Associated Press. “We can’t wait to help New York City and the nation kick off the holiday season with the return of this cherished tradition.”

This year’s parade will take place on Thursday, Nov. 25 from 9 a.m. to noon. It can be watched live from the streets of Manhattan or, of course, on TV on your local NBC channel. (The parade will also be televised in Spanish on Telemundo.) But if you’re lucky to be in town around that time, a parade route has been released on Macy’s website.

If you prefer to stream the parade, you still have options. You can stream it live on NBC.com (you will need log-in info for your cable provider) or through Verizon Live. Starting at 9 a.m., NBCUniversal and Verizon will live-stream the parade on Verizon's Twitter and on its YouTube page.

This year’s parade will feature 15 giant character balloons, 28 floats, 36 novelty, and heritage inflatables, including a few kid favorites. New balloons this year include Netflix’s Ada Twist Scientist and Grogu (Baby Yoda) from Star Wars’ The Mandalorian. Pikachu and Eevee will also float in on a giant Poké Ball-inspired sled for their 25th anniversary.

Tiptoe the reindeer, the face of Macy’s holiday campaign will be the first-ever balloon puppet in the parade. Toni the bandleader bear will also make its debut, along with acorns, pumpkins, snow crystals, ‘Believe’ stars, candy canes, Astronaut Snoopy, and Chase from PAW Patrol. Kids will also love the Sesame Street and Blue’s Clues floats in the lineup! Staples such as the Rocking Moose, Rocking Lobster, and Ronald McDonald, are also coming back.

There Will Be Performances, Too

Of course, Santa Clause will be there with all of his jolly joy! As for celebrities, Carrie Underwood will perform “Favorite Time of Year,” a song from her album My Gift (Special Edition). Jordan Fisher will perform an original Disney Cruise Line song.

This year’s parade will also feature the casts from Broadway’s SIX the Musical, Moulin Rouge! The Musical & Wicked. Performers from The Radio City Rockettes and NBC’s Annie Live!, will also perform. An adaption for the television of the original Broadway production will premiere on Dec. 2.