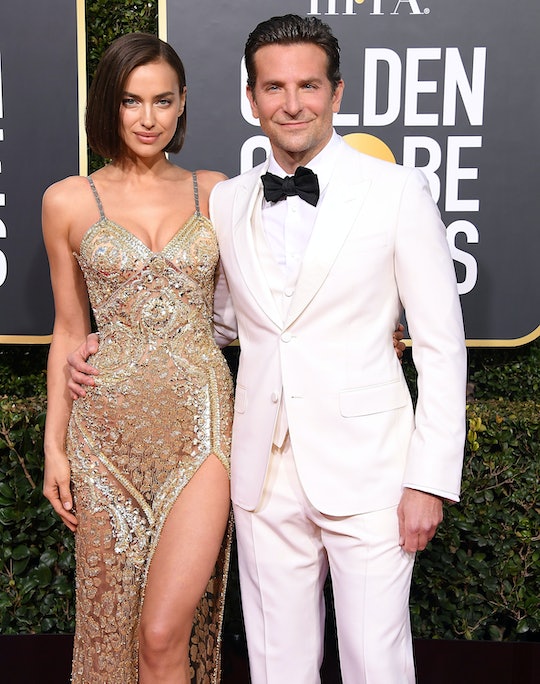 We spy with our little eye a pretty familiar face.

Irina Shayk is living her best beach life on a tropical getaway, and she took some time off from looking incredible in her many bikinis to post some vacation pictures on social media. In between several scenic shots of water, sand, and snouty wildlife, the supermodel snuck in a picture of a very familiar face — her ex Bradley Cooper. Looks like their plan to co-parent their 5-year-old daughter Lea de Seine is going swimmingly!

In a recent Instagram post, Shayk shared a carousel of amazing shots that will make you want to wish you were in the Bahamas right this very second. The Sports Illustrated model shared several photos of herself posing next to a beach pig and some of the adorable animals in their element. She looked like a goddess as she posed in the sand inside a giant heart and also dipped her fit inside the water filled with new aquatic friends.

But it was the photo sneakily slipped inside the bunch that has caught most people’s eyes. In it, Shayk wore a floral bikini with a mesh cover up and some sunglasses. She stood next to ex-boyfriend and actor Bradley Cooper, who sported some short black swim trunks and a huge smile. The A Star Is Born actor held a hose into a trough of water as some pigs enjoyed some refreshments. Shayk leaned her head against Cooper’s shoulder and flexed her toe in full-body model perfection. She captioned the post with a single red heart.

While it is unclear if the former couple’s young daughter was also enjoying fun in the sun, of course, this new image has people wondering if this reunion might be a romantic reconciliation. Cooper has recently been linked to Huma Abedin, former top aide and adviser to Hillary Clinton. (The couple were supposedly set up by a very unlikely cupid — legendary Vogue editor, Anna Wintour.) And there was much speculation on Shayk’s dating situation too, as it was reported that she briefly dated rapper and fashion designer Kanye West.

But the single mom is used to the endless speculation on her love life. “Tomorrow there is going to be a rumor that I’m dating my doorman, okay? Then after tomorrow, it’s going to be someone else,” she told High Snobiety. “Look, there’s always something there, and I’m just keeping it to myself.”

Beyond that red heart emoji, Shayk might just stay tight-lipped on her love life for the time being and continue to keep her fans guessing.

More Like This
Exclusive: Watch Hayden Panettiere Talk About Addiction Treatment 4 Months Postpartum
Gabrielle Union Admits She May Be Becoming A Bit Of A Dance Mom With 3-Year-Old Kaavia
10 Parenting Lessons From Abbott Elementary That You'll Want To Write Down
Kylie Jenner Is Unbothered By A Little Breast Milk Leaking On Her T-Shirt