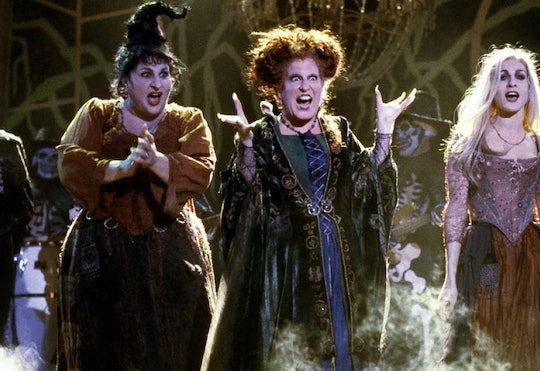 Is Hocus Pocus Too Scary For Kids Under 5?

It’s creepier than you remember.

Hocus Pocus opens with a murder. The murder of a child, in fact, young Emily Binx who follows the siren call of Salem’s own Sarah Sanderson to have the life force sucked out of her by Sarah and her witch sisters, Winnifred and Mary. Then they turn Emily’s older brother, Thackery Binx, into a black cat. Then the townspeople try their best to hang them. So no, Hocus Pocus is probably not for the under 5 set. Even if ‘90s kids did watch the 1993 Halloween gem when it was first released as young children themselves. Even if yes, young children dressed as the three Sanderson sisters for trick-or-treating is pretty much the cutest thing you will ever see. Here’s what else parents need to know.

The Sanderson Sisters are funny, yes, but they also eat kids.

Fans of the original Hocus Pocus, which absolutely deserves a rewatch by older kids and their parents in preparation for watching Hocus Pocus 2 on Disney+, will remember the Sanderson Sisters as darkly hilarious. Bette Midler is campy perfection as de facto head of the family Winnifred, Kathy Najimy is perhaps the least menacing as Mary, while Sarah Jessica Parker is the sister who brings them all the kids. Because that’s right, they eat kids. Or at least dine on their energy to stay young… or “younger” as Winnifred points out.

And they’re not opposed to turning the children they don’t eat into cats.

The parents in Hocus Pocus are pretty absent.

Another frightening element of Hocus Pocus for small children is the fact that parents don’t actually help the kids, even when Max and Dani Dennison tell their parents that the witches are back to threaten the children of Salem, they don’t listen. Which, when you are younger than 5 years old and your parents are your lifeline to the world, is pretty terrifying.

There are so many jokes little kids won’t get.

There’s a bit of sexual innuendo in Hocus Pocus, all starting with a virgin (poor Max) lighting the Black Flame Candle. Then there’s a scene where a man is dressed as the devil for Halloween and the Sanderson Sisters think he’s the real deal that gets a bit weird. Definitely not something little kids would understand or want to watch.

So, what age is Hocus Pocus appropriate for?

Common Sense Media recommends Hocus Pocus, which is rated PG, for kids over the age of 10 years old, which feels right. The language is pretty light on cursing, the sexual references are more innuendo and hinting than actual sex, and it’s generally a fun movie for families with older kids.

Where can you watch Hocus Pocus?

Both the original Hocus Pocus and Hocus Pocus 2 are available to stream on Disney+. Definitely watch with your older kids... after the little ones go to bed this Halloween.

More Like This
Disney Introduced Its First Openly Gay Teen Character In Strange World
Brandy Will Play Cinderella Again In The Disney+ Movie The Pocketwatch
All The Nights The Grinch Airs On TV In 2022
How To Watch Elf In 2022, Including A 24-Hour Marathon

This article was originally published on Oct. 8, 2017