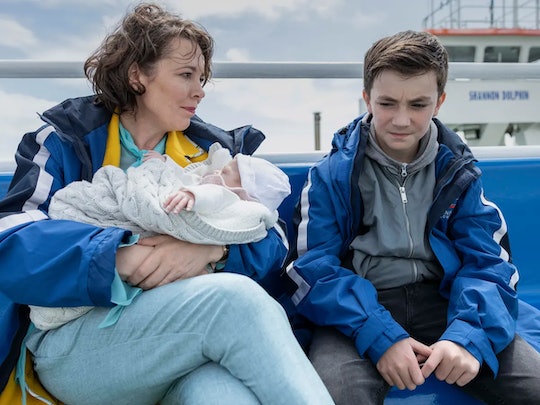 But is the road trip buddy movie based on a true story?

Bright light Olivia Colman is about to hit the screen again with what is essentially a road trip buddy movie, but not exactly the kind you might expect. In Joyride, Colman plays a solicitor whose plans are hijacked by a taxi driven by a troubled teen, and their adventure seems too wild to be true. But is it? Here’s what you need to know.

What is Joyride about?

In the Irish flick, Colman plays small town unmarried lawyer Joy, who has given birth to a baby girl named Robin and we soon discover this was not in her life plan. She decides she simply can’t handle it and wants to give up her baby, but she’s thwarted when a 12-year-old self-sufficient boy named Mully (newcomer Charlie Reed) hijacks the taxi she’s hired and doesn’t realize she is sleeping in the back seat. Mully has just left a fundraiser given in memory of his late mother, devastated because his father (Lochlann O'Mearáin) has his own nefarious plans for the cash. The two set out on an unlikely road trip, both trying to escape their difficult lives in the peninsular southwest region of Ireland, County Kerry, and form a sweet friendship when she asks him to help with the baby in exchange for not calling the police.

Is Joyride based on a true story?

If Joyride seems too far-fetched to be true, that’s because it’s not. It’s entirely fiction. But if those emotional elements ring true for you, that could be because it was written by Emmy-winning Irish documentary filmmaker Emer Reynolds, who clearly has a knack for delving into a person’s emotional baggage and how that baggage affects the way they navigate the world. Especially new parents. And of course, as a filmmaker she knows how to make the most of the gorgeous Kerry countryside in Ireland. But Joy and Mully are pure fiction. And quite delightful at that, especially once they find their bond through their own difficult pasts and trying to handle baby Robin.

How can you watch Joyride?

You can catch Colman playing a complicated mom in Joyride in theaters across the country starting on Dec. 23. And if you simply can’t get enough of Colman’s distinctly fallible struggles as a mother, definitely catch The Lost Daughter on Netflix as a bit of a Colman twofer. She knows how to play a mom who doesn’t fit into the cookie cutter mold better than anyone.

More Like This
10 Of Julia Louis-Dreyfus' Best Quotes On Motherhood & Raising Her Sons
Marcel The Shell Is Heading To The Oscars!
Pixar’s 'Turning Red' Is Nominated For An Oscar — Here’s How To Watch It Right Now
Marcel The Shell Is Officially An Oscar-Nominated Movie Star
What Parents Are Talking About — Delivered Straight To Your Inbox