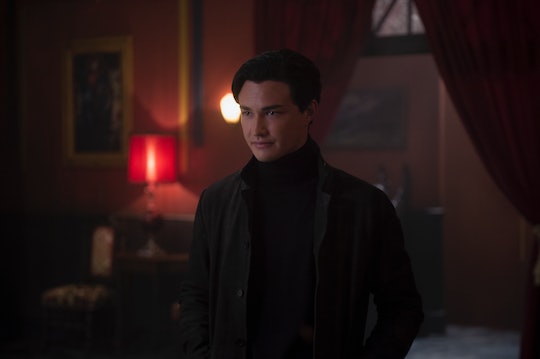 He may have connections to a Marvel character.

Kiernan Shipka has done an amazing job at playing Sabrina Spellman in the Chilling Adventures of Sabrina over the past four seasons. But there are also some solid supporting characters who deserve a shout out, like Sabrina's maybe crush (other than the beloved Harvey Kinkle), Nick Scratch. As a warlock, he seems like the most logical romantic option for a young witch like Sabrina, but is Nick Scratch in the Chilling Adventures of Sabrina comics too?

The TV show took some liberties with fresh new characters when the show debuted in 2018, and, according to BuzzFeed, Nick is one of them. On the show, he’s a fan of Sabrina’s father, who happens to be a powerful and famous warlock himself. Naturally, Nick befriends Sabrina and he actually seems like a decent guy.

Nick Scratch Is Not In The Comics

Although he’s not in the Chilling Adventures of Sabrina comics, Nick might be based on a character of the same name from Marvel Comics’ Fantastic Four. In those comics, Nicholas Scratch is a villainous wizard from New Salem, Colorado. He can travel between dimensions and control others with his mind, so he’s definitely an all powerful warlock. It’s not clear yet how powerful Nick will prove to be on Chilling Adventures of Sabrina, but if he was inspired by the Marvel character, he could be important.

In the show, Sabrina is pretty committed to her relationship with Harvey right from the jump, though that’s not exactly how it happens in the comics. In the comics, it takes a little more time for that romance to blossom. But after seeing the way Nick and Sabrina hit it off and become good friends by the end of Season 1, it's hard not to root for them too.

Gavin Leatherwood, who plays Nick on Chilling Adventures of Sabrina, told TV Guide that Nick and Sabrina might be bonded in a way that she can't bond with her mortal friends. Which, to be honest, makes a lot of sense. And I’m a firm supporter of the Harvey and Sabrina dynamic.

"[Nick] knows that she has this revolutionary kind of quality where she's this strong leader who will carry on that legacy of her father," Leatherwood said. "The destiny of her path is so much greater than just starting a 'Wicca' club and making Harvey forget that she told him that she's a witch. There is just so much power that she contains, that Harvey, being a mortal, is so unfamiliar with and that Nick is well versed in."

But he also referred to Nick as Sabrina’s "sidekick," so maybe it’s just a platonic thing rather than a will they or won't they dynamic going into Season 2. And while the Marvel comic character Nick was kinda evil, the CAOS version just wants to help Sabrina as she comes to terms with her own powers — and may or may not be in love with her.

Although Netflix did not renew the show and brought it to an end with Season 4, Nick and Sabrina lovers will be quite happy with how their relationship ends on the show. *Spoiler alert* they end up together in The Hearafter, with the show ending for good on them kissing, according to TV Line. How is that for a big finale?

This article was originally published on Oct. 29, 2018