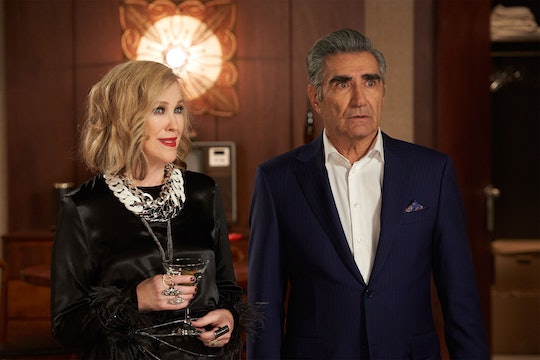 Is Schitt’s Creek Appropriate For Kids? Here’s What Parents Need To Know

Our bébés can’t truly appreciate the humor of Moira Rose.

There are few shows that have been as universally loved in recent years as Schitt’s Creek. The CBC comedy from father/son duo Dan and Eugene Levy has won pretty much every accolade and award available in its six season run, and no wonder. Schitt’s Creek was one of those shows that managed to be funny, unique, tender, and inclusive all at the same time. In other words, the kind of show you might want to introduce to your kids if it’s appropriate. But the truth is, Schitt’s Creek is probably not the best for your bébé.

What Is Schitt’s Creek All About?

Moira Rose herself said it best, “if heaven had a creek, it would be this one.” Of course, that’s not how things started out for the Rose family. Johnny and Moira Rose (played by Eugene Levy and Catherine O’Hara) were living a lavish life of privilege when they lost everything after being scammed by their accountant. Well, almost everything. They still had their two spoiled adult children, David and Alexis (Dan Levy and Annie Murphy) and ownership of a small town called Schitt’s Creek. They move to town and try to deal with a life they weren’t expecting. Along with a town full of people they don’t understand.

There they figure out how to come back together as a family and forge new paths. They even learn how to fold the cheese.

The Show Is Full Of Positive Messaging

There is so much to love about Schitt’s Creek, so many messages that parents will want to impart to their kids. Not the least of which being the empathy and inclusivity shown to the LGBTQ+ community throughout the series. There are other incredibly positive messages about staying true to yourself, accepting individuality in all forms, and the importance of compassion. All done with a light touch and a warm sense of humor that is easy to watch.

David and Moira fold in the cheese.

There Is Some Swearing & Sexual References

There might not be a lot of cursing on Schitt’s Creek, but there’s more than enough to discourage parents of young kids to keep them from watching. There are also sexual references throughout the series that could be uncomfortable for young ones.

Schitt’s Creek Is Best For Teens

Schitt’s Creek is rated TV-14 for mature themes, and is perhaps best for kids 12 and up to watch. That being said, parents know their own kids best. Schitt’s Creek might have swearing and mature content and discussions of sex, but it’s also a kind and intelligent show. One of those shows with hilarious one-liners, great costumes, and fun characters that the entire family can watch together. Especially if they’re old enough to appreciate the nuances of Moira’s humor.

More Like This
10 Parenting Lessons We Learned From Red & Kitty In 'That '70s Show'
The Best Valentine’s Day TV Episodes For Kids
Freeze! The Single From The New 'Bluey' Album Just Dropped
Exclusive: Watch How A Group Of Princesses Save The Day In Netflix's New Animated Series
What Parents Are Talking About — Delivered Straight To Your Inbox