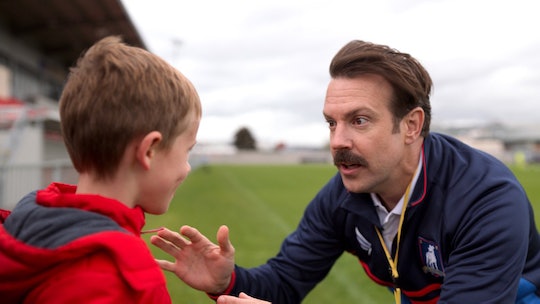 Wholesome Themes With A Side Of Swearing: What Parents Should Know About Ted Lasso

Sorry little ones, you can thank Roy Kent.

By now, there are few people who haven’t at least heard of the Apple TV+ hit series Ted Lasso. The series has been lauded by fans everywhere as a feel-good, positive show, which might give parents the idea that Ted Lasso is appropriate for kids. But before you tune in with the little ones, please read on.

Ted Lasso centers on a sweet and caring coach.

Ted Lasso stars Jason Sudeikis as the titular character, a former college football coach who arrives in England to take over with AFC Richmond, a popular soccer team full of difficult characters and a team owner named Rebecca Welton (played by Hannah Waddingham) who wants the team to tank. Despite struggling with being away from his own son and soon-to-be ex-wife back in the U.S., Lasso manages to be incessantly positive and upbeat. At first he grates on everyone’s nerves but soon has the team, and even Rebecca herself, singing his tune.

Fun fact: The show was based on a character Sudeikis first played in NBC Sports ads.

The show is cheerful... with vulgar language.

‘Ted Lasso’ is not for young kids.

While Lasso himself tends to keep his language pretty PG in the series, the same can’t be said for the rest of the team. Particularly Roy Kent, played by Brett Goldstein, who is a true vulgarian. Dropping more F-bombs than you can count whenever he’s on screen, his presence alone is enough to keep kids from tuning in. Kent certainly isn’t the only character to use offensive language, but he’s perhaps the best at it.

There are also some romantic storylines.

Another element of Ted Lasso that might not be suitable for kids is the sexual content. Throughout the first two seasons there are multiple romantic storylines, and the show does not shy away from talking about sex or even sharing a bit of nudity now and then.

Apple TV+ has Ted Lasso rated as mature for language and some nudity, so best to avoid watching with the kids. That being said, as Common Sense Media notes, kids older than 15 or 16 years old will likely love the series. Yes, there is a bit of sex and a fair bit of language, but there are also empowering friendships, lessons about sportsmanship, and genuine feel-good moments throughout the series that make up for some of the adult content.

As one review on Common Sense Media reads, “There are plenty of sexual references and language but if your teen knows not to say the language and they know the birds and the bees it’s incredible. Ted Lasso is such a positive guy and you can’t help but love him!”

The feel-good hit is already a hit at the Emmys.

After winning seven Emmys in 2021, Ted Lasso is at it again with a staggering 20 nominations in 2022. The show nabbed nominations for Outstanding Comedy Series, Casting, Writing, Directing, and a whole slew of acting nods for pretty much the entire cast. Reason enough to revisit the series before the 2022 Emmy Awards on Monday, Sept. 12.

The first two seasons of Ted Lasso are available to stream now on Apple TV+.

This article was originally published on November 8, 2021