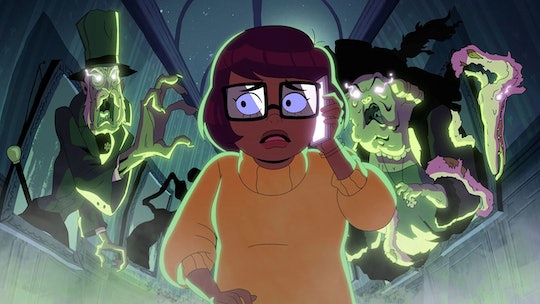 If you were a big fan of Velma Dinkley, the real brains behind the Mystery Inc. gang we all know and love from the Scooby-Doo universe, you’re certainly not alone. The young solver of mysteries and wearer of iconic square-shaped glasses has finally, finally gotten her own series, Velma, now streaming on HBO Max. But if you were hoping to share your own personal love of Velma with your kids, jinkies it’s a bad idea. Because this new take on Velma is meant for adults only. Here’s what else parents need to know.

What is Velma on HBO Max about?

Mindy Kaling announced last February that she would be voicing the iconic Velma Dinkley in the new animated series Velma, which she also co-wrote with frequent collaborator Charlie Grandy as an origin story about the high schooler for HBO Max. “I’m so excited to be voicing this iconic character! Velma will struggle to navigate the pitfalls of high school, her budding sexuality, and a serial killer intent on murdering every popular kid in town,” Kaling shared in an Instagram announcement at the time.

The series sees Velma in her early stages of solving mysteries and even features some of the other members of Mystery Inc. like Daphne (voiced by Constance Wu), Fred (Glen Howerton), and we can only hope, Scooby-Doo and Shaggy. Maybe even Scrappy-Doo.

Velma is a dry, funny, silly series that is very much in Kaling’s (creator of The Mindy Project, Sex Lives of College Girls, and Never Have I Ever) well-trod wheelhouse of diving deep into the lives of teenagers, but it’s also surprisingly scary sometimes. And while the series does delve into Velma’s budding sexuality, it’s really the mysteries that will prove too much for kids.

What is Velma rated?

Velma has been rated TV-MA, which can happen for various reasons including graphic violence, explicit sexual activity, or indecent language. Television series rated TV-MA are meant for audiences over the age of 17 years old, making Velma a series that is really more for adult fans and people who are kids at heart than actual children.

When can you watch Velma?

The first two episodes of Velma dropped on HBO Max on Jan. 12, with the next two episodes dropping on Jan. 19, so you can consider putting the kids to bed a bit early and enjoying a deep dive into the origin story of Velma Dinkley, as imagined by Mindy Kaling, all on your own.

More Like This
When Does 'Yellowstone' Season 5 Come To Peacock? Not Soon Enough
10 Parenting Lessons We Learned From Red & Kitty In 'That '70s Show'
Hey Fellas, 'Ted Lasso' Season 3 Is Coming Soon
Exclusive: Watch How A Group Of Princesses Save The Day In Netflix's New Animated Series
What Parents Are Talking About — Delivered Straight To Your Inbox