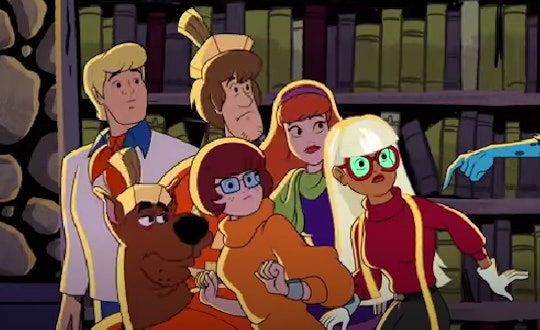 Mystery Inc. fans have long speculated about one member in particular. Velma Dinkley. Beyond being vastly under-appreciated in the early years of the Scooby-Doo franchise for her wit and intelligence, fans have wondered for years about Velma’s sexuality. And it turns out they were absolutely on the right track, because Velma is finally portrayed as a lesbian in the new Scooby-Doo movie, Trick or Treat Scooby-Doo!. Finally, Velma is getting her moment to shine and in this new movie, she even gets a love interest. All hail Velma.

The new animated movie Trick or Treat Scooby-Doo!, which premieres on Oct. 14 at 7 p.m. on Cartoon Network and is available now for digital purchase, features the Mystery Inc. gang tracking down Coco Diablo, the head of a diabolical crime syndicate that has been behind all of the costumed villains who have plagued them throughout the years. After they capture her, suddenly copy cat costumed villains start to ruin Halloween in Coolsville. And so Coco teams up with the gang to help find the person behind their new enemy.

Another cool fact about Coco is that she and Velma are into each other. And the internet is very happy about it. A clip from Trick or Treat Scooby-Doo! of Velma first seeing Coco Diablo and going all googly-eyed over her has wracked up more than 5 million views on Twitter. Because people are really ready for Velma to live her most authentic life.

Fans have been sharing their joy over Velma being a lesbian on social media. “Velma being gay is actually massive, we're at a point in time when this major character, full of decades-old history and fans, gets to actually be a lesbian and that's just another part of her canon now! Sometimes we need to celebrate these wins,” one tweeted.

Another tweet shared the pivotal clip from the movie where Velma talks to her best friend Daphne about “crushing big time” on Coco Diablo.

Hayley Kiyoko, who played Velma in two Scooby-Doo movies, added on Twitter, “I remember booking Velma in 2008. It was my first big role in a movie. I also remember thinking ‘I wonder if they know they hired a lesbian as Velma’ here we are, 14 years later…… love you all so much.”

Director James Gunn explained in a tweet in 2020 that he had “tried” to make Velma a lesbian in his own live-action 2002 movie Scooby-Doo 2: Monsters Unleashed. “But the studio just kept watering it down & watering it down, becoming ambiguous (the version shot), then nothing (the released version) & finally having a boyfriend (the sequel),” he wrote at the time, per Variety.

Tony Cervone, director of SCOOB! and SCOOB! Holiday Haunt, also wrote in 2020 that he believed Velma identified as a lesbian in an Instagram post. “Marcie and Velma - Mystery Incorporated. I obviously don’t represent every version of Velma Dinkley, but I am one of the key people that represents this one. We made our intentions as clear as we could ten years ago. Most of our fans got it. To those that didn’t, I suggest you look closer. There’s no new news here.”

Now fans who have supported Velma have been vindicated. She is finally living her authentic life. And it only took 60 years.

More Like This
Brandy Will Play Cinderella Again In The Disney+ Movie The Pocketwatch
How To Watch Elf In 2022, Including A 24-Hour Marathon
All The Nights The Grinch Airs On TV In 2022
Disney Introduced Its First Openly Gay Teen Character In Strange World